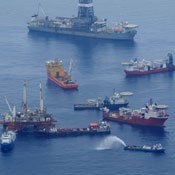 Earlier this month, ProPublica published an FAQ that attempted to explain what's known about how the Deepwater Horizon spill happened, whether it could've been prevented,and who's on the hook for the disaster.

We've now updated it with some of the latest questions, and answers: how widely the oil is spreading, which agency official admitted there's "no enforcement" regarding offshore safety equipment and why concerns are growing about the dispersants BP is using.

Background on the Accident Itself

What are the basics of what happened?
On the night of April 20, the Deepwater Horizon oil rig had an explosion and two days later, it sank in the Gulf of Mexico. Eleven workers were killed. The rig was operated by British oil giant BP but owned by Transocean, the world's largest offshore drilling company. The incident ruptured the oil well and has caused what is known as a blowout, or an uncontrollable spill.

What caused it?
That's still being investigated. The spill occurred when a safety device called a blowout preventer failed to stop the flow of oil from the well. BP has called the failure of this device "inconceivable," but new details have emerged as to why it may have failed.

According to a "60 Minutes" interview with a survivor, part of the blowout preventer's seal broke during an accident weeks before the explosion. A Transocean supervisor, when told of the problem, said it was "no big deal," and operations continued despite several such equipment problems.

Halliburton was the subcontractor handling the cementing process on the Deepwater Horizon rig, which it completed shortly before the explosion.

Why didn't the blowout preventer work?
Blowout preventers are hardly foolproof. The Wall Street Journal, which has had great coverage of the disaster, reported that federal regulators had questioned in 2004 whether an "integral" part of blowout preventers, shear rams, would work in deep-water conditions. The Deepwater Horizon rig was drilling in about 5,000 feet of water, and the device obviously did not do the job.

Despite their concerns about the shear rams, regulators from the Minerals Management Service–the agency that regulates offshore drilling—did not issue new regulations to strengthen industry requirements, according to the Journal.

The Journal also reported that another device—one that the BP's rig lacked—was a backup shutoff device called an acoustic switch that is used by some other oil-producing countries. MMS regulators had once considered requiring the acoustic switch. But after the industry spoke out against it, MMS backed down and simply recommended that the matter be studied.

So the spill wasn't prevented. Could cleanup and containment efforts have gone better?
Following news of the leak, plans were announced to burn some of the oil in order to contain the spill, but there was no fire boom on hand in order to facilitate that burn, despite a 1994 response plan that suggested their immediate use in the case of a major Gulf oil spill, according to The Press-Register in Mobile, Ala.

Other cleanup and containment efforts include skimming oil off the surface and using miles of protective booms to contain the oil's movement toward the coast.

BP has also bought up much of the world's supply of dispersants to use on the spill. Dispersants are chemicals intended to break up the oil. As we've reported, those chemicals could present their own environmental concerns, since their exact makeup is kept secret.

What was the White House's response?
The Obama administration says it has been fully engaged since "day one," but NPR reports that it was only after the rig sank two days after the explosion that the White House stepped up its involvement. At the time, President Barack Obama was assured that no oil was leaking from the ruptured well, and he subsequently left for a short vacation, according to a helpful NPR timeline. A leak was noticed that weekend.

In recent weeks, the Obama administration has grown increasingly frustrated with the oil companies and regulators alike. President Obama blasted oil company executives for blaming each other at congressional hearings, calling it "a ridiculous spectacle," and criticizing the Minerals Management Service for its "cozy relationship" with industry.

What kind of job were regulators doing leading up to this incident?
We've had a hard time getting hold of anyone at the Minerals Management Service, the agency in charge of regulating offshore drilling. Officials there have not responded to our many calls and e-mails.

But in a hearing last week, one MMS official said the agency left it to oil companies to certify that blowout preventers were working properly. The official said the agency "‘highly encouraged,' but did not require," companies to have backup systems to trigger blowout preventers in case of an emergency," according to The Wall Street Journal. That led to this gem of an exchange:

"Highly encourage? How does that translate to enforcement?" Coast Guard Capt. Hung Nguyen, who is co-chairing the investigation, asked at the hearings.

"There is no enforcement," Mr. Saucier replied.

The MMS official also testified that in 2001, new rules were drafted to tighten monitoring of offshore drilling and lay out requirements for blowout preventers, but the rules were never approved by higher-ups in Washington.

The Minerals Management Service—an agency within the Department of the Interior—has a rather mixed record. In 2008, the regulator was involved in a sex and drug scandal with oil and gas company representatives. Since then, the agency has also been criticized for understating the risks of oil spills in its plans to expand drilling off the coast of Alaska. A government investigation also concluded that an office at MMS withheld data on offshore drilling from environmental risk assessors in the agency.

The Washington Post also reported that when BP was seeking permission to drill with the Deepwater Horizon rig, MMS gave BP what is known as a "categorical exclusion"—meaning drilling plans would not be subjected to a detailed environmental analysis. Exemptions are given when the likelihood of a spill is seen to be low. Reuters reports that between 250 and 400 exploration programs in the Gulf have been granted these exclusions. The White House and Department of the Interior have promised to investigate MMS' liberal use of categorical exclusions.

Interior Secretary Ken Salazar announced several reforms on May 14, including breaking MMS into two separate agencies—one that oversees leasing and collecting royalties and another that oversees safety inspections and enforcement. As we've noted, some say this doesn't go far enough to mitigate the regulator's conflicts of interest.

Who's on the hook for what happened?
While accepting that it has to pay for the cleanup, BP has tried to distance itself from the spill and push at least some responsibility on Transocean. "It wasn't our accident," BP CEO Tony Hayward said on NBC's "Today" show on May 3.

Hayward has said that the company will honor "all legitimate claims for business interruption."

The contractor Transocean, for its part, has tried to limit its liability to $27 million, citing a law that's a century and a half old, which says a vessel's owner is liable only for the value of the vessel, according to the AP.

A whole slew of investigations have been launched—and hearings scheduled—by Congressional committees, the Coast Guard and MMS. President Obama also plans to create a commission to investigate the BP spill.

But liability for damages is a separate issue, and at the moment, damages are capped at $75 million by a 1990 law. Lawmakers in both the House and the Senate have introduced legislation that would raise the cap on damages to $10 billion. Those lawmakers, with support from the White House, hope to apply the measure retroactively to BP.

At the moment, the measure is having a surprisingly difficult time making it through the Senate, with Republicans blocking the measure. Several Republicans have argued that BP has promised to pay for damages and will "be held to" that promise, and that raising the liability cap to $10 billion could hurt smaller oil companies.

ProPublica is an independent, non-profit newsroom that produces investigative journalism in the public interest.