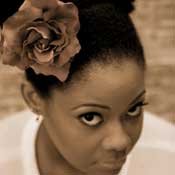 I know a woman who lives in the house with her children, her husband and his violent temper. She wears a mask. This woman, whenever I see her, has a joyful disposition, even when she's wearing long sleeves and ankle-length skirts or pants, even in this heat. I'm certain she has bruises she's hiding. Her children, I've noticed never take too many steps without knowing where she is at all times. I've never asked, because I don't want to cause problems, but I wonder if they're more concerned for her or themselves. Even if he doesn't hit them, only naivete would allow someone to think they aren't affected.

I also know a woman who was in love with the idea of being in love. Not long after ending the relationship with her long-time boyfriend, she started dating someone else (an elusively erroneous character), and within a short time, they were engaged. I always thought their relationship was unhealthy for her. In fact, I was bold enough, twice, to tell her: once a few weeks before their pending nuptials. She said: "I don't really want to marry him either, but it's too late now. I already sent out the wedding invitations."

By their six-month anniversary, her husband had raped her, and the two separated. He wanted to explore other options.

The past couple weeks, I've been especially sensitive to the stories of victims and survivors of abusive relationships, as our office has been abuzz, preparing for the Chick Ball. Stories of people I've known, mostly women, have come back to my remembrance. Responses of other people to their stories have also come to my remembrance: "If he did it, she must have deserved it because he's not that kind of guy." ... "Yeah, but I know he loves her." ... "Some men are just like that, they don't mean anything by it." ... "Sometimes, you've gotta show 'em who's boss."

The list of sad, ignorant and downright stupid responses goes on and, unfortunately, on. But one response, in particular, stands out: "I wouldn't ever let a man lay his hands on me," I heard a woman say recently with confidence. The squeak in her voice as she rolled her eyes betrayed her words. My response--the one I've come to give when issues like this arise (and giving a "you should know better" lecture isn't feasible)--was simply: "I hope I never get to a point where I need what's supposed to be love that badly."

No one wants to be abused. And from the time I've spent talking with them, abusers don't want to abuse. For abusers, a lot of their behavior, in whatever form it takes (emotional, verbal, physical, sexual), is about control. And I've come to realize that for those who've been in abusive relationships, it's about a lack of a sense of self. So I find myself grateful for the inexplicable and undeserved grace I've received.

The mask-wearing woman who lives with her abusive husband and children, could have been me. The woman who rushed into marriage because people around her were whispering, "He's a good catch, good looking, and you're getting old," ignoring her gut instinct could have been me.

For years, I ambled through life pretending to be who people thought I was: confident, in-charge and not taking mess from anybody, especially a man. But that's not who I was. Quite simply, I was a mess. I didn't merely seek approval in all the wrong places from all the wrong people; I sought it from any source that had affirmation to offer. I don't know why, but I never found myself in the arms of a man who saw fit to abuse me in any way. I suppose some of that is because the creator protected me because I had abused myself plenty, without need of "help" from a man.

Self-narrated, negative dialogue was the background chatter of a typical day for me. Everything that was good, I wasn't; everything that was bad, I was. I grew up with a family that loved me wholly and unconditionally. They showed me what it meant to be a good person; they didn't just tell me. But there was a hole in my soul shaped like my father. I didn't know it was there. I didn't know to ask for it to be filled. And so, for years, unconsciously, I filled it with words of hatred for myself. I was groomed for abuse, and I'd done it to myself.

There are much-needed programs popping up across the country, similar to the Batterer's Intervention Program at the Center for Violence Prevention. Sandy Middleton, the CVP director, said poetically to the Jackson Free Press not long ago about the program:

"Everybody has a core of beliefs ... what you believe about what's right and what's wrong. Feelings and actions come from the core set of beliefs. Anger management 'mows the grass.' It teaches you how to deep breathe, how to act differently. Batterer's intervention gets down into the core beliefs, getting to the root of the belief systems that keep the cycle of violence in place--'tilling the soil,' to allow fundamental change."

Fundamental change is, indeed, germane to a recovering abuser's future success as one who can manage his (or her) emotions. And a deeply rooted sense-of-self is imperative for the woman (or man) who finds affirmation from another that doesn't cost a loss of dignity or compromising of self and a love that doesn't hurt. What good does it do to love someone else before loving yourself, when resentment for the other is inevitable because you'll be pouring more into the relationship with the other than you are with yourself?
As we, thankfully, have reached a point in our society where we recognize the importance of helping those who need it, it is just as important that we edify one another. There isn't anything sappy, too "girly" or weak about empowering others.

Frederick Douglass once said it's easier to build up a boy than repair a broken man. Just as we make it our business to repair broken people, let us uplift one another, doing what we can to fill up the holes in the souls of those around us. We never know what garbage someone (or they themselves) may have put in there instead.

WOW! This was such a thought-filled article. This would also be a great article for high school and young college kids who are in abusive relationships. Many people do not even think of how tragic "self-abusing" behaviors are. They contribute to low self-worth and low-self-esteem. It is believed that suicide is the ultimate in "Self-Hate." Natalie, your picture brings to my mind Billie Holliday. I guess it's the flower you wear. The stories you tell are ones with hidden agenda - just like Billie. A Lady "Singing the Blues". We all wear a MASK from time to time; however, it is only a problem when we didn't put it on and consequently, we can't/won't take it off.