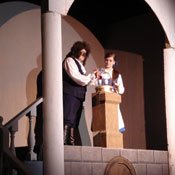 As I swung open one of the massive white doors into New Stage Theatre, the buzz of young voices immediately greeted me. I quickly glanced at photos tacked on the wall to my left of hundreds of smiling kids and teens who peered back at me. As I made my way into the practice room, waiting for rehearsal to resume after lunch, I passed a group of young girls sitting on the stairs who broke into the impromptu "Beauty and the Beast" classic: "Be Our Guest." I had a sudden flashback of my little sister and me, dressed in our matching "Beauty and the Beast" nightgowns, singing that song, laughing and trying to brush our teeth at the same time. Hearing the girls sing reminded me of something simple: I adore "Beauty and the Beast."

This year Chris Roebuck, New Stage education director, chose "Beauty and the Beast Jr." for the New Stage summer drama campers to perform at the end of their four-week intensive theater camp.

"Being a man, I am not ashamed to say I like ‘Beauty and the Beast,'" he says.

Things seemed a bit chaotic. What looked to be hundreds of kids (I discovered later there are only 78), were milling around, talking, playing and laughing. But when Roebuck called the kids to order, their cavorting ceased immediately. The campers began warming up, and by the time they were done, I was amazed at their ability to perform. Campers range in age from 10 to 17, but it's easy to forget that they are not theater veterans. Watching the opening scene with Belle and the villagers who sing "Good Day," I was immediately drawn in.

A standout of the show is Belle (and not just because she's the play's antagonist). The petite Sarah Proctor, 14, has an operetta voice that seems to effortlessly erupt from her lungs. The budding thespian did not even know she could sing until she started performing with New Stage three years ago.

"I've always wanted to be a Disney princess," Proctor says. "I'm hoping to go to Disney World and be a princess one day."
Unlike the hundreds of others girls who probably share this same dream, Proctor may actually be destined to walk through Magic Kingdom in a shiny gold ball gown.

Her mild-mannered, shy, 15-year-old co-lead, actor Jacob Thomas, says he likes playing the Beast because he gets to explore another side of himself. "I'm a very gentle person," he explains, "so it's nice to be able to see another side of me."

Not only do Belle and Beast show undeniable talent, the other actors and actresses also have no trouble morphing into their respective roles. Alex Borst, the candelabra Lumiere, lapsed into an impeccable French accent. I also watched the kids perform the song "Gaston," which lauds the title character's supposed perfections but really shows Ben Rodenmeyer's (aka Le Fou's) charisma (and ability to do somersaults).

Simultaneously, in the foyer, a group rehearsed the song "Human Again." The singers looked a bit frazzled: The song would be a challenge for most vocalists, sliding up and down the musical scale, changing octaves several times. My visit ended with an enthusiastic reprise of the song I'd heard right after stepping foot into New Stage, "Be Our Guest." I left humming my favorite childhood tune.

The young actors and actresses of New Stage Theatre's summer drama camp have put in long hours and hard work in efforts to successfully pull off "Beauty and the Beast Jr." If you've already seen the movie or the musical, the kids will reinvigorate the work for you. And if you or your children have never seen it, you definitely need to get your butt over to New Stage and see this iconic performance. The story is captivating, funny, even suspenseful at times, and the songs only add to play's overall charm.