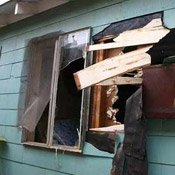 A proposed city ordinance will make it legal for the city to demolish houses with suspected drug activity without violating owners' or residents' rights, as was the case in this Ridgeway Street house.

The Ridgeway Street duplex that figured prominently in a federal civil rights case against former Mayor Frank Melton must be cleaned up or torn down, according to Jackson's Community Improvement Division. A Jan. 19 letter from the city to Jennifer Sutton, the owner of 1305 Ridgeway St., deems the property "a menace to the public health and safety" and calls on Sutton to appear at the Feb. 23 City Council meeting to explain why the city should not demolish her building.

By voting to demolish the duplex, the Council can assess Sutton the full cost of demolition, along with a $1,000 fine.

Sutton has a pending civil lawsuit against the city demanding $250,000 for the damage inflicted by Melton's 2006 raid on the house.

The Jackson Free Press could not reach Sutton by phone or at her Jackson home on Thursday. Minnie Rhoads, who sold the duplex to Sutton prior to Melton destroying it, spoke out against the city's move. She said the city should not be working to demolish the building and add more cost to Sutton, prior to arranging a settlement with Sutton.

"They're really doing (Sutton) dirty," Rhodes said. "The city isn't right for trying to do this."

Ward 6 Councilman Tony Yarber said he was not looking forward to the council decision on Feb. 23, saying a decision either way would not make everyone happy.

"Either way this decision is not going to be a win/win decision. No doubt, the people living around the property are suffering because the house is an eyesore and has been an eyesore for a long time. The condition of the place won't make home values around it go up, or selling property around it any easier--but at the same time, if the city moves forward with this, it won't be the best idea considering the litigation is still ongoing right now, and if the city is found at fault, it'll be a double-whammy for the city," Yarber said.

On the night of Aug. 25, 2006, then-Mayor Melton went with his two police bodyguards and a handful of young men to the Ridgeway house. After clearing the house's occupants at gunpoint, the group proceeded to destroy the duplex's facade with sledgehammers, according to neighbors. Melton, who was drinking alcohol, knocked out several windows in the duplex with a large stick, witnesses said.

Melton claimed later that the duplex was a drug house, but no drugs were found on the night of the raid.

Melton and his two bodyguards, Marcus Wright and Michael Recio, beat state charges for the incident in 2007. Melton died in May 2009, and Wright and Recio both pleaded guilty to misdemeanor charges following a subsequent federal indictment. On Jan. 21, a federal judge ordered the two former bodyguards to pay $7,500 each to Sutton, along with $2,500 each to Evans Welch, who was living in the duplex at the time of the raid.

I take exception with the use of the word "threaten" in the title to this piece. When the city files paperwork to follow due process in regard to a property that is out of code, that is not a threat. It is the city performing its responsibility in regard to property code violations. If I understood this piece, the city is exercising its authority to give the owner due process prior to taking its rightful steps in regard to the code violations which this homeowner obviously is guilty of if the pictures here and in the video media are any indication. As a homeowner in Jackson in a totally different neighborhood, I can tell you that, regardless of the prior history on this house and regardless of how many lawsuits the owner has pending against anybody, it is time for the owner to get her house up to code. I work hard as do so many others in Jackson to maintain my property and when a neighbor takes advantage of me by allowing such a mess in the neighborhood, they directly affect the value of my property. They, essentially, look me in the eyes and rob me. I resent the everloving heck out of that kind of behavior. Get it cleaned up and repaired, landowner, or city, do what you are required to do legally and get the problem solved. The real problem here is that the previous Mayor had not a whit of respect for the law and his reprehensible behavior has taken center stage instead of the plight of the citizens who have to live in and around this mess. God bless them.

It is a "threat" if there are consequences, as there are in this case. Doesn't mean it's an illegal threat, but it is a threat.

The code violations by the property owner are the "threat." A threat is defined as an expression of an intention to inflict pain, injury, evil, or punishment; an indication of impending danger or harm; a menace." The property owner who lets their property get in and/or remain in such disrepair is a threat to the neighbors and the city. The city's legal action following due process is not a threat. It gives the property owner notice they are not in compliance with the law and should immediately come in compliance [none of which is a threat; we all are suppose to follow the law or suffer the consequences] OR if the property owner persists in violating the city's ordinances (laws) the city will take certain action. For the word threat to be used as something the city is doing when it is only carrying out its responsibility to keep properties up to code bothers me for it sets a tone that is inconsistent with the reality of the legal situation, makes the city look like a buggar bear, in appropriately, and makes it look okay for the property owner to let their property go to heck in a handbasket. Donna, this is a real hot button for me--wouldn't you guess it? :) One of the things that the City of Jackson can do to invite businesses here, invite development here, invite growth and progress here, is to consistently hold property owners to code, following due process. I realize this property has had an interesting and unique past. We are in the NOW. I support legal action by the city that is within the bounds of the law to clean up Jackson's neighborhoods everywhere. Consistently. Period. None of which do I personally, as a property owner, consider a threat by the city.

Why the quick action here? There is a house on Lakeshore Dr with a freaking tree on/in it that has been that way since Katrina. How long does it take the city to move on this code enforcement stuff?

Sorry it's a hot button to you, J.T. I'm not sympathetic at all on this one, considering the way the city has handled itself throughout this. And, yes, you can "threaten" action if someone doesn't do something, as the city is doing here. Beyond that, I am happy to agree to disagree and leave it there.

This is one of those rock-and-a-hard-place situations. I can definitely see where JT is coming from and if this were any normal circumstance, I'd applaud enforcing the code violation. However, given the extraordinary circumstances behind the house, I believe it's the city's responsibility to clean it up and fix it. After all, it was an elected city official (who, sadly, is no longer around to defend himself) and two then-city of Jackson police officers who took park in the destruction during an illegal raid.

GE, I'm with you on part of that. The timing on this is weird, why did this property move up the list so fast when there are others in much worse shape that have been that way longer? That is suspicious to me given the circumstances you stated. Although it may ultimately fall to the city to pay for the damage done and I do think it should, the owner of the property should bring the house up to code immediately. The damage and circumstances have been well documented. There is no reason to leave her property in that condition. I wonder if her insurance company is refusing her claim and she just doesn't have money for the repairs?

My cousin lives near the house and often drive by as a short-cut to get to my house. It's in worse shape now than it had been before. The timing is very suspicious. If it were me, I'd feel like I'm being picked on. It's quite a delicate issue to balance.

If more than one property is getting the notice, then I don't have a problem with it. I guess it's just odd timing with the Ridgeway Street house. I don't think Ms. Sutton is getting special favors. Her house was occupied until Melton and his minions knocked a hole in it. Like I said earlier, I think the city should be responsible for the clean-up and repairs. If I came and damaged anything on your property, you'd expect me to repair it or at least provide you with monetary compensation to make the repairs.

if i were ms sutton, i'd file a restraining order against the city. had it not been for the actions of the city via the mayor and police officers traveling in official city vehicles under the guise of official city work, then the house would not be in such serious violation of code. in my opinion, this is borderline reprehensible behavior for elected officials to engage in. it's like giving an employee the day off and then firing them for not showing up for work...

it's like giving an employee the day off and then firing them for not showing up for work... That is one way to put it. I hadn't thought about a restraining order. I wonder if she plans on filing one. If she or someone who knows her is reading it, I'd recommend it.

@ Chef Tony: Thank you. I agree. My posts are not about giving Mrs. Sutton or anyone special favors. My posts are about the importance of the city following established administrative proceedings consistently to rid this city of blighted properties. It is a foundational measure that a city must take to provide quality of life to its residents, attract the kind of citizenry that will maintain quality of life and attract businesses that will increase its tax revenues. That was the reason for my dismay at the word "threaten" to describe that procedure. I stand by that dismay and agree with Donna that she and I are in loving disagreement over the use of the word. I can see, Donna, that you are focused in on the aspect of this particular Sutton case and I am focused in on the necessity for the consistent legal implementation of the administrative procedure for blighted properties, per se. I hope and expect, Donna, that you are not against the consistent legal implementation of the administrative procedure to rid the city of blighted properties.

Is this property a key piece of evidence in the civil case? Is the city an active part of the case? Where do you think we are headed from here?

I'm not a lawyer (I just play one on here), but given that the destruction of the house was because of willful intent, I would say that it is key evidence. However, as I mentioned earlier, the house has more damaged done to it, possibly by both natural and human elements.