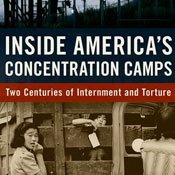 I did not find out until college that my country interned Japanese Americans in concentration camps after Japan attacked Pearl Harbor in 1941. Even then, I did not know the full story; I certainly did not know that the United States also detained other American citizens of German and Italian descent. Or that our government saved Jews from Nazi concentration camps only to further detain them in the U.S. throughout World War II.

Dickerson begins with his own ancestor's forced immigration to this country in 1688. He traces our government's forceful relocation and internment of Native Americans beginning with colonialism, and then that of Japanese, German and Italian Americans, and Jews into concentration camps in the 1940s. Dickerson ends with a brief overview of the Immigration and Naturalization Service's current detention centers and the controversial prison at Guantánamo Bay, Cuba.

The detainees' stories live through their personal accounts, and Dickerson weaves his family's history into the span of the centuries. Those narratives and his extensive research provide a poignant and accurate depiction of America's concentration camps. The atrocities that these people experienced combined with the fact that they did absolutely nothing wrong makes this history appalling.

The detainees' fear and confusion is palpable in the story of then-11-year-old Doris Berg, who lived in Hawaii in 1941. FBI agents whisked away her parents, both American citizens (her father was of German descent), in the days following the Japanese attack on Pearl Harbor, leaving Doris and her younger sister to fend for themselves. Two days later, her stepsister, Eleanor, arrived, but agents soon took Eleanor into custody as well.

"I had to save my sister because she was going to be murdered, too," Berg recalls thinking, assuming her father was dead. "They took her downstairs, and then across the lawn, and I was biting and kicking and scratching. One of the men ... had this look in his eyes of tremendous compassion. ... [O]ut of desperation, I cried out, ‘Please don't take my sister!'"

"Armed conflicts in which the enemy is of a different race or religion" almost always motivates concentration camps, Dickerson explains. The state's logic is "protection of the majority" by isolation of the enemy alien.

The sheer racism behind the camps was not lost on the detained Americans. William Minoru Hohri, of Japanese ancestry but born in America, was 15 when America sent him to a concentration camp in Manzanar, Calif.

"We could never escape the oppressive reality of incarceration. We were prisoners. Not prisoners of war, for we were not from the enemy nation," he says. "We felt more like criminals. Our crime was genetic and cultural. It was not what we had done, but what we might be planning to do. ... [W]e were such a feared species we were imprisoned in a concentration camp, surrounded by a barbed wire fence and guard towers."

More than 120,000 Japanese Americans and tens of thousands of German and Italian Americans and Jews populated concentration camps across the U.S. throughout the 1940s. They lived in filthy conditions, many with nothing but one-roomed tar-papered shanties to protect them from the elements. Many suffered abuses from soldiers who guarded the camp.

Tokio Yamane, a camp leader in the Tule Lake, Calif., camp, attempted to stop a fight between prisoners and guards: "From about 9 p.m. that evening until daybreak, we were forced to stand with our backs against the office wall with our hands over our heads, and we were continuously kicked and abused as we were ordered to confess being the instigators of the disturbance."

Our government has not provided an equivalent apology or compensation to Italian Americans, German Americans and Jews subjected to its concentration camps, not that any amount of money could make up for what the detainees went through. President Barack Obama apologized to Native Americans in 2009, but compensation is unresolved.

Near the end of the book, I was shocked to learn that after the obvious mistakes of detaining thousands of Americans, our government still insists on detaining and torturing prisoners at Guantánamo Bay under the presumption of guilt and without trials.

"I don't think we learned anything (from World War II internment). There is so little sense of history, a lack of any historical memory," says Mitsuye Yamada, a World War II American concentration-camp survivor.

Dickerson tackles that lack of historical memory with this book, bringing to light the atrocities that we are often so willing to conveniently forget.