Jackson Business Round Up 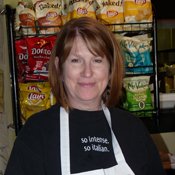 Debbie Rankin, owner of Congress Street Bar and Grill and Basils on Congress Street will help host the next "Downtown After Dusk" event on May 13 in front of her restaurants.

The success of last month's "Downtown After Dusk" event in the courtyard of Underground 119 has secured a new tradition in Jackson. Julie Skipper, one of the organizers, said today that the event will not conflict with "Fondren After Five" in the future. The next "Downtown After Dusk" will take place May 13 starting at 5 p.m. in front of the new Congress Street Bar and Grill on the corner of Congress and Amite Streets. The event is sponsored by Downtown Jackson Partners, the Jackson Convention and Visitor's Bureau, YP Alliance, Jackson Downtown Neighborhood Association, Underground 119, Entergy and the Jackson Chamber of Commerce. "The event is a way to get people to support business owners downtown and get people to stay downtown after work," Skipper said. "We were overwhelmed in a good way, it was a great, diverse crowd. ... We were expecting 300 people, and 600 showed up."

For the past several years, Highland Village was the site of the annual "Sante South," which brings more than 30 wine vintners to Jackson. This year, the event will be held at Highland Village on April 24 at the Gardens at Jackson Place outside the Pinnacle building. Event organizer Ian McDonald said the space is ideal to support the increase number of participants. He said the new location provides more indoor capacity in the event of rain. Sante South will include wine and food tastings, live music and a silent auction. Proceeds will benefit the Alzheimer's Association of Mississippi. Tickets are $85. To purchase tickets or find out more information visit Sante South's Web site.

Sedrick Lilley, owner of Campbell's Bakery in Fondren has expanded his business to serve lunch. Campbell's began serving a lunch menu last week. Sandwiches will feature turkey, beef and chicken all roasted in-house, Lilley said. Campbell's is open 7:30 a.m. to 1 p.m. Monday and Saturday and 7:30 a.m. to 5 p.m. Tuesday-Friday. Lunch will be available from 10:30 a.m. until close. Across the street, at Basil's, chef Nathan Glenn is revamping the lunch menu at his family's sandwich shop. Beginning today, Basil's will offer a nine-grain, thin-crust pizzas and expanded panini offerings. Next week, Glenn plans to introduce a new array of salads, including cashew chicken. The changes are part of an overall plan for the five restaurants Glenn's family owns, including the Congress Street Bar and Grill, scheduled to open downtown in two weeks in the old Tye's Restaurant location on Congress Street downtown.