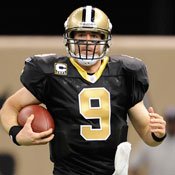 The New Orleans Saints (5-0) scored on their first drive and never looked back in an offensive effort that gained over 500 yards, with seven different Saints making it into the end zone.

The game represented New York Giant Eli Manning's first visit to the New Orleans Superdome as a professional football player. Not only do the Saints remain undefeated, but they knocked off the previously undefeated New York Giants (5-1) with a healthy 48-27 drubbing.

Tight End Jeremy Shockey, formerly of the Giants, made a touchdown reception against the team that had taken him in the first round of the 2002 NFL draft, but traded him to the Saints in the summer of 2008.

Since I'm such a Giants hater, I enjoyed this win by the Saints.

In some ways this was an almost ridiculously good game on the part of the Saints, particularly on the offensive line. The utter lack of pressure on Brees is the sort of thing that takes a team directly to the playoffs. While the running game never quite got going, one of the most entertaining things about any Saints gameplan in 2009 are the weapons they use and, in some sense, the plays they *don't* run. While Reggie Bush did get an opportunity or two to display his signature running-the-wrong-way style of "playmaking," I noticed that there were no swing passes or check-downs to Reggie in the flat (or maybe one?), which suggested Brees was seeing a lot of stuff over the middle that was working for him in the Giant's soft zone. And then there's the sheer receiving talent; Brees mostly put the ball where he wanted to, but there was a catch or two were simply incredible plays by the receivers -- those don't show up anywhere but in the passer ratings. There was weakness on special teams and some trouble with tackling that let a few plays get through to the secondary; but the defense gets props for making plays happen at critical moments, like Sharper's un-interception (brought back for a penalty) and the fumble created on the Eli sack. That was pivotal to crush any potential momentum swing. Great game. The Saints are for real.

The Saints have "come a long way, baby." I remember going to New Orleans and there were many people in the stands with BROWN BAGS over their heads and they called themselves The AINT'S. This was bad news for the team. My only hope is that they don't shoot themselves in the foot as they have done on so many occasions in the past. Right now it seems that they are SB Bound. GO SAINTS!!!!! I do get a little sad when I think of Duce McAllister's dedication to the Saints and the injuries he sustained trying to make it all happen for his team. I guess this is the nature of the beast.

I'm still not quite buying into the Saints yet, but they did make little bit of a believer out of me yesterday. I haven't seen the Giants manhandled like that in quite a while.

The Saints looked great and Super Bowl bound. The Vikings slipped by because their field goal kicker missed a field goal. I don't dislike the Vikings but they will lose next week to the Steelers. The Saints look like they may not lose a game this year. However, we saw what happened to the Patriots when they didn't lose a game and showed up for the Super Bowl as arrogant and invincible. A miracle ensued! I'm not buying the Saints either Golden Eagle until they face some adversity, loss(es) or injuries and respond to it. It could be argued, I suppose, that adversity has been the Saints cover, shield and closest companion throughout their existence and they're responding now to it. That might be true and we will see if that's the case. I'm all for the Saints making it to the Super Bowl as long as the Steelers are their foe. Then my loyalty will be divided until the game starts and the Saints score first. The Saints, via this season alone, are about to become a big TARGET just like the Steelers, Cowboys, Patriots and a few other teams are, i. e. a team everyone wants to beat. This position or status carries great weight, expectations, glory, letdowns and hatred. I imagine the whole nation would throw a big party if the Saints won it all. This would be a great story of overcoming and finally moving on! Who could be against this? Except maybe a greedy and selfish Steelers fan! I'll admit I'm worried about the Ravens, the sorry Titans and a few other teams with nothing to lose trying to put the Steelers out of contention. The Ravens have had just as much bad luck at the last minute as we have had. But they don't have Roughburger, Pala-mall-him. Hien Ward and the Steelers' legacy to push them forward. The only way Ray Lewis scares us is he pulls up in a stretch limousine with a long knife.