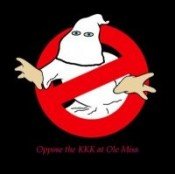 This image appears on the Facebook page of Students Against the KKK at Ole Miss.

The Mississippi White Knights of the Ku Klux Klan plans to protest the University of Mississippi's decision to drop a controversial pep song Saturday before the football game against Louisiana State University. In response, Ole Miss students of all races are using Facebook to organize opposition and counter-demonstrations.

The Klan told Oxford media that its members will appear in full Klan regalia at the university in front of Fulton Chapel on Nov. 21 from 10 a.m. to 11 a.m. to hold a peaceful protest on the right to free speech. "We'll be there with robes on. It will probably just be a silent protest," KKK Great Titan Shane Tate of Tupelo told the Daily Mississippian. "We don't believe in hurting anybody, and we're not going to come up there with guns and ammo, but we will defend ourselves if we have to."

The chancellor has not said that spectators could not yell out the phrase, which indeed would be violation of their constitutional right to free speech at a public event at a public university. He did ask students to not chant it, however, and later asked the band director to drop the song.

The Oxford Eagle reported on its Web site today that Nathan Ray Nunley, 20, a white student from Tupelo, started a Facebook group this week -- Students Against the KKK at Ole Miss -- to counteract the inevitable bad publicity that the Klan is trying to kick up for Ole Miss and the state.

"I personally feel that if students don't show proper resistance to the KKK's presence, then the whole country will assume that the University of Mississippi condones their message. This is unacceptable for this institution's reputation," Nunley told the Oxford Eagle.

The Klan is protesting Chancellor Dan Jones' request to band director David Wilson last week to stop playing the song, "From Dixie With Love," at school events, including football games, due to students chanting "The South Shall Rise Again" during the song. The chant is a Confederate rallying cry and offensive to many students and spectators, as is the song "Dixie." The fight song combines "Dixie" with "Battle Hymn of the Republic."

"We live in the antebellum south which is based on slavery, and 'Dixie' is a song that celebrates that time," Mark Potok, the director of the Intelligence Project for the Southern Poverty Law Center, in Montgomery, Ala., told the Jackson Free Press. "Organizations like the KKK are still living in a disillusioned world."

Tate, the great titan, told the Daily Mississippian that his ancestors fought in the Confederate War, but weren't slave owners. "ut they stood tall and fought for the South because the South was being invaded," he said.

In a prepared statement, Tate tried to draw on racism against the United States president to draw support for his klavern's cause. He said that several speakers will address the state of the college and the nation, from their point of view: "They will be focused on Ole Miss and the current administration that is following in the footsteps of Barack Hussein Obama as he drives our nation into the ground."

"I think I'm gonna sleep in," Brandon Irvine, an opinion columnist for the Daily Mississippian, told the Jackson Free Press today. Irvine says that this issue is far over-rated and that the KKK is "all talk." It was rumored around campus that the KKK would protest at the Ole Miss vs. Tennessee game last week, but they did not show.

"It's just so not relevant," Irvine said. "If people would just let it go, it wouldn't still be an issue."

Another student group, One Mississippi, is also planning a counter-demonstration and met at the Delta Gamma sorority house Thursday night to strategize. According to its Facebook page, which has more than 200 members, of various races, the group wants to use the recent fight-song controversy to have a conversation about race at Ole Miss.

"Dialogue is the base of One Mississippi, in which we try to foster honest and frank conversation about the present trials that plague the Ole Miss campus. Not only does dialogue bring awareness, but it brings understanding," One Mississippi member Melissa Cole wrote on Facebook.

The group plans to give out T-shirts that say: "Turn your back on hate: I live by the UM creed," as well as "Unity" stickers.

Tate's Klan klavern also plans a lighting of the Christmas cross in Tupelo in December.

Darrell Creecy is an intern at the Jackson Free Press. Donna Ladd also contributed to this report.

that logo is AWESOME

Twelve Kluckers vs. 250 students heckling them. THIS is the Mississippi I want to live in! The members of the Mississippi White Knights of the Ku Klux Klan spent about 10 minutes waving flags, displaying Nazi-style salutes and occasionally gesturing at a group of about 250 hecklers that included young children. They were protesting the school's decision to drop a pep song that included "Dixie."

Too bad the students message won't sink into their heads.

They should have stopped by the Capitol City Classic.

"I think I'm gonna sleep in," Brandon Irvine, an opinion columnist for the Daily Mississippian, told the Jackson Free Press today. Irvine says that this issue is far over-rated and that the KKK is "all talk." It was rumored around campus that the KKK would protest at the Ole Miss vs. Tennessee game last week, but they did not show. "It's just so not relevant," Irvine said. "If people would just let it go, it wouldn't still be an issue." Ms. Ladd, I'm curious what your take on Brandon Irvine's commentary is.

The problem with that attitude, WMartin, is that the problems just continue without the students coming out and standing up for what is right. Yes, these Kluckers are irrelevant, but they wouldn't have been protesting in Oxford in the first place had Ole Miss band not still been playing a song with "Dixie" in it in 2009. For God's sake -- "Dixie." Really? My take overall is that the whole thing is positive. When the Klan turns up all upset because of a change like that, it really ought to make the apologists for racial rhetoric and symbols think about who they're lining up with. Sounds like that is happening. It truly is time for Ole Miss to come fully into the 21st century. And its student, alumni and faculty must lead the way. Any efforts to continue celebrating the "lost cause" of slavery and its symbols makes this state look really bad and hurt our people of all races. Put another way: It's time to grow up. Fortunately, many people connected to Ole Miss are doing just that. And everyone should challenge anybody who isn't -- just as I've had to challenge people telling racist jokes and using the n-word my entire life. It's never too late to do the right thing.

The more people laugh at them, the more fun we'll all have.

That is an incredibly cool logo.

What Ms. Ladd said. Thank you for that. It needs to be repeated again and again until it sinks in.

Thanks, blkjazz. And once again for anyone who believes the rhetoric that the symbols of the Confederacy were/are not about slavery/race, please read Mississippi's articles of secession, or even the first part: Declaration of the Immediate Causes which Induce and Justify the Secession of the State of Mississippi from the Federal Union. In the momentous step which our State has taken of dissolving its connection with the government of which we so long formed a part, it is but just that we should declare the prominent reasons which have induced our course. Our position is thoroughly identified with the institution of slavery�the greatest material interest of the world. Its labor supplies the product which constitutes by far the largest and most important portions of commerce of the earth. These products are peculiar to the climate verging on the tropical regions, and by an imperious law of nature, none but the black race can bear exposure to the tropical sun. These products have become necessities of the world, and a blow at slavery is a blow at commerce and civilization. That blow has been long aimed at the institution, and was at the point of reaching its consummation. There was no choice left us but submission to the mandates of abolition, or a dissolution of the Union, whose principles had been subverted to work out our ruin. That's the sh!t Ole Miss' obsession with the Confederacy is commemorating. Truly time to let it go.

"it's begining to look alot like Christmas" did you see the red and green number on that one guy?...what's with that.....

Unless they photoshopped them in. :) They really did show up. I wonder if they knew exactly what type of reception they'd get. Probably so.