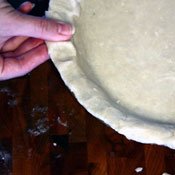 Very cold ingredients also add flakiness to your crust. Prior to mixing, all your ingredients should be ice cold, including the flour. Your butter or shortening will need to be "cut in" to your dry ingredients, which means mixing a solid fat into dry ingredients until they come together as small particles. A food processor, pastry cutter and even your own two hands work well. Just be sure not to over-mix or handle the fat too much as the heat from your hands may cause it to melt.

As you begin rolling out your dough, keep a small bowl of flour nearby and use it generously as this will prevent the dough from sticking. Begin by forming a patty in the middle of the board. Starting in the middle of the patty, roll the pin away from you. Reposition and roll in the other direction. Finally roll the pin back toward you. It may take several passes to get your dough to the optimal thickness.

Combine flour and salt. Cut shortening into flour using a food processor or pastry cutter until mixture forms coarse crumbs. Add water and mix just until dough comes together and forms a ball. Chill dough for approximately thirty minutes prior to rolling out.

Roll dough out onto a floured surface until it reaches the desired width and thickness. Carefully drape dough over an ungreased pie plate. Gently press dough into the corners of the plate. Using a knife or kitchen shears, trim excess dough around the edges of the plate. If desired, crimp edges by using a fork or by making a thumbprint around the perimeter of the crust. Makes 1 pie crust.