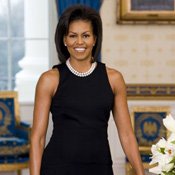 Since the time of our first president's wife, Martha Washington, American women have looked to our nation's first ladies for style cues and inspiration. Of course, Jacqueline Kennedy Onassis stands out as the most stylish and most influential in fashion of all the first ladies in America's history. She was the face of the Kennedy era, and her signature look included pearls, oval-shaped sunglasses, a bouffant and classic designs by Oleg Cassini.

Well, Jackie O better hold on to her pearls. We have got a new Mrs. O on the scene, and she's proving to be the nation's leading fashionista. The whole nation seemed more abuzz about what Michelle Obama would wear on inauguration day than what President Obama would actually say in his inauguration speech.

My personal favorite was the stunning white Jason Wu gown festooned with flowers that she chose to wear to the Inaugural Balls. It evoked Grace Kelly mixed with Jacqueline Kennedy with a modern, creative twist. The young American designer—he's only 26—found out that Michelle Obama was wearing his gown along with everyone else: on television. Michelle Obama has helped fuel Wu's career; as he presented full, flawless spring and fall collections at the tents during New York Fashion Week, when many other young designers chose to show their collections as presentations because of the recession.

Recently, Mrs. Obama's most fantastic fashion moments have occurred while on tour with her husband in Europe. To meet the queen of England, Mrs. O wore a white top and black skirt (again designed by Isabel Toledo), a black cardigan by Azzedine Alaia, and what has become her signature jewelry: a double-draped pearl necklace and earrings. This look was simple and chic, but with an American elegance.

The biggest fashion face-off of the European tour occurred in France when Mrs. Obama went toe-to-toe with former model and France's first lady, Carla Bruni-Sarkozy. Bruni-Sarkozy chose a simple Dior suede dress and coat in grey, and Michelle Obama was all color in a floral black and red dress and coat by up-and-coming fashion designer Thakoon. Compared to Bruni, Mrs. Obama stood out with her bold, bright choice—showing that she dresses for herself and has fantastic personal style.

Mrs. Obama has also been known to sport affordable fashion that everyday Americans can purchase. For her June appearance on ABC's "The View," Mrs. Obama wore a figure flattering $148 Donna Ricco dress from White House/Black Market. The dress sold out instantly online and in stores across the country.

Another favorite of Mrs. O's seems to be J. Crew. Her little budding fashion darlings, Malia and Sasha, donned Crewcuts for J. Crew on Inauguration Day, with mom wearing gloves from the brand. Also, while in London visiting a cancer care center, Mrs. Obama wore a sparkly off-white cardigan and turquoise A-line skirt by J. Crew.

Our first lady's style has been a popular subject in fashion magazines, too. A recent issue of Harper's Bazaar showed Tyra Banks in a Mrs. Obama-inspired spread, complete with Barack, Malia and Sasha as models. In March's Vogue, one of the best-selling and largest fashion-packed spring issues, Mrs. O graced the cover, wearing another Jason Wu dress.

"Change was the clarion call of Barack Obama's election campaign, though I don't think any of us at Vogue initially realized that would include the difference that was going to be made by First Lady Michelle Obama's wardrobe," wrote Vogue's editor-in-chief, Anna Wintour in the magazine.

Unfortunately, all of us cannot have Mrs. Obama's wardrobe, but achieving a look inspired by our first lady's style is simple: Choose your best pearls, a bright-colored cardigan (perhaps with some rhinestone or sequin detailing), an A-line skirt, and pointed-toe kitten heels or flats. Luckily, we have two of Mrs. Obama's favorite stores in the Jackson area. Fairly new outposts of White House/Black Market and J. Crew are located at the Renaissance shopping center in Ridgeland. You can head out there, or shop at some local boutiques such as Coattails, Maison Weiss or Treehouse. Don't forget to check out vintage brooches (a Mrs. O. staple) at shops such as The Orange Peel in Fondren, Repeat Street in Ridgeland or Retro Redo, located within the Antique Shops of Jackson.