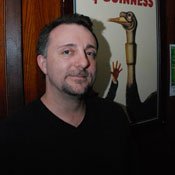 Damon Hogben manages the crowds and enjoys the music at his usual spot inside Fenian's.

For 13 years, Fenian's has been Jackson's only Irish pub. General manager, Damon Hogan gives the lowdown on the history of Fenian's and their upcoming St. Paddy's festivities March 21. A native of England, Hogan has been working at Fenian's for the past four years.

Where did the name "Fenian's" come from?
It has a couple of different meanings. The main reason behind the name is Fen McCool, who was the founder of a band of warriors called the Fenians, and they were the most bad-ass warriors Ireland had ever seen and one of the most prevalent bands in Irish history. So we're named after Fen McCool and his band of warriors, and that's going all the way back to the Middle Ages.

How do you think Fenian's brings the Irish spirit to Jackson?
It is definitely the neighborhood pub, which is the first and foremost thing that your Irish pubs were, and we serve the neighborhood. I try to hire people that are very friendly, congenial and get along with people. I used to joke that even when I was just coming as a regular and not working here as a manager that I would come in not knowing anyone and leave with a bunch of friends. You know, you'll always talk to someone if you're here on the right nights. So that's what we do; it's traditionally Irish. Of course my mother is Irish, but I grew up in England, and now I'm at an Irish pub in Jackson, Miss.

How have you seen St. Paddy's Day change in Jackson over the years?
It grows bigger every year, I do believe. Supposedly we're the third biggest parade in the Southeast or something, and then other people say it's the third biggest in the country.  But anyway, I know it's bigthe numbers last year were 50,000 to 60,000 people attended. You know, we're close enough to downtown that where the parade ends is only eight blocks that way, then out of those 50,000 or 60,000 if we get 1 percent, then you know, were seeing a marked increase. And we can't fit them all in this little building, so that's why we do the whole outside parking lot.

So do you have a particularly memorable St. Patrick's Day here at Fenian's?
I try and forget them because they're so painful. By the time the parade is over, I'm ready to get in bed. I'm in so much pain, and I'm so physically exhausted. It is the busiest daythink of every holiday rolled into one. We literally do as much business in one day as we do in a typical week. It's probably because we are the only Irish pub arounddefinitely in Jacksonfor at least 200 miles.