In With the New | Jackson Free Press | Jackson, MS

In With the New 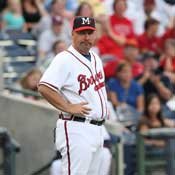 The Mississippi Braves have two reasons to celebrate this season: They are the defending Southern League champions and they are beginning their fifth season in Pearl.

The roster is still in flux as the M-Braves approach their season opener at home against Carolina April 9. But one familiar face will be back. Manager Phillip Wellman is returning for his third season. Wellman has led the M-Braves to two consecutive playoff appearances.

Expect the bulk of the M-Braves' roster to consist of players from the Atlanta Braves' High Class A team in Myrtle Beach, S.C. That team went 89-51 in 2008.

"A good portion of that club should progress up to Double-A," Atlanta farm director Kurt Kemp told The Clarion-Ledger. "Some things could happen at the major league level that would push some players back, but it's my preference that most of the Myrtle Beach guys move up. I hope they do."

At least one of those potential M-Braves is aiming for bigger things. Hicks, who is in the Braves' big-league camp for the first time, has caught the eye of A-Braves manager Bobby Cox.

Hicks said his goal is to play in the majors this season.

"I think I need to get off to a good start in Mississippi to prove I can play in that league and then move on from there," Hicks said.

On the radio
The M-Braves will be heard on a third station in three seasons. This year, the M-Braves' radio home will be 103.9 FM. That should make it easier to hear the games at night. Fortunately, play-by-play man Ben Ingram returns for his second season. Ingram was featured in the Jackson Free Press' 2008 Sports issue.

Tickets, anyone?
The M-Braves are offering mini-ticket plans this season for the first time. The plans, which range in price from $45 to $310, can be for random games or based around weekends, entertainment or fireworks. And all season tickets come with $300 in free groceries. For information, call 601-932-8788.