Relish In The Hellish 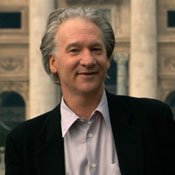 Bill Maher outside the Vatican City in "Religulous."

The tagline of Bill Maher's documentary on the faults of religion, "Religulous," touts the film as the "#1 Sacrilegious Comedy in America." Maybe I was under a rock while Lionsgate was promoting the film, but this tagline introduces a concept about the movie that I wasn't expecting: it's funny. Quite funny, actually.

I'll be honest: I've never liked Bill Maher. I don't have a solid basis for this dislike, as I've only caught portions of his show once or twice, but he just comes across as an a**h*le. This is precisely the reason, though, that "Religulous" is often engaging and almost always comical. The combination of Maher's personality, his well-chosen interviewees, and sharp editing will make you laugh, think and feel squeamishsometimes all at once.

Maher's interviewees are undoubtedly a varied and colorful group: a U.S. senator, a pastor of a mega-church, Christian truckers, a Vatican astronomer, an anti-Zionist Jew, gay Muslim activists, a man claiming to be the Second Coming of Christ and more. Maher confronts these people with his classic straight-to-the-point, unrelenting and very un-mystical interview style, and it catches them off their guard. This, in turn (along with careful editing, I'm sure), leads to many blank stares and fantastic awkward silences à la "The Office." The editing doesn't end there, though.

The interviews are interspersed with an abundance of clips and stock footage that "illustrate" the topics that Maher and his subject discuss, with each ranging from the comical to the disturbing: cartoon depictions of religious history, televangelist sermons, religious riots and homophobic picketers, to name a few. These clips break up the interviews and show the myriad ways that our culture has absorbed, perverted and communicated religion. You can also see these cultural implications in the interesting locations to which Maher travels, among them holy sites in Israel, Speakers' Corner in London, a trucker's chapel in North Carolina, TBN's Bible-based theme park in Orlando and the Creation Museum in Kentucky.

While Maher spends most of his time on the Abrahamic religionsChristianity, Islam and Judaismhe also touches on Mormonism, Scientology and even Kantheism, a dogma-free religion based on the sacrament of cannabis.

During Maher's discussion with Reverend Ferre van Beveren, founder of the Amsterdam THC Ministry (over a joint, of course), the Reverend's hair catches fire, prompting Maher to scramble to his rescueone of those great moments that almost seems scripted. To document Scientology, the film uses an excitable man on Speakers' Corner. Although his rants about Scientology principles are seemingly insane, the film confirms each with subtitled notes as Gnarls Barkley's "Crazy" plays in the background. Later, after Maher and his crew are kicked off the grounds of the Mormon Temple, he talks with former Latter-Day Saints member Tal Bachman. Yes, Tal Bachman of "She's So High" fame. Religion is certainly not an easy subject to discuss, but scenes like these make "Religulous" fun to watch.

There are even a few moments in "Religulous" when Maher lets down his guard, lending a personal touch to the film. The documentary opens with Maher speaking about his childhood experiences with religion, which he then discusses with his sister and elderly mother. The cameras keep rolling as the crew travels from place to place, leading to some reality show-esque confession moments that, briefly, bring Maher down to earthbut only a little. Moments later, he's back to grilling that anti-Zionist Jew about his attendance at a Holocaust denial conference.

On one hand, I feel a bit guilty about endorsing this film. It certainly has a lot of potential to be offensive, and isn't the most balanced piece of reportingit's one-sided and shows some of the more extreme examples of religious devotion. Maher can be condescending, and the arguments and views he expresses are nothing new.