Auditorium Now Home to Films, and a Cooking Show 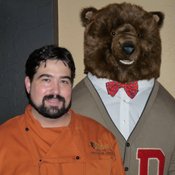 Chef Nathan Glenn with The Auditorium's new mascot, Boutwellnamed after a bear cub Glenn and his brother found behind Basil's in Fondren.

The Auditorium's Executive Chef Nathan Glenn is a busy man, and is only becoming busier and busier. On Aug. 25, Glenn will film a pilot for a cooking show that he hopes will get picked up by a network. Glenn will be preparing "cool southern food," such as the Redfish Jimmy, shrimp and Grits and Creole seafood pasta served at the restaurant and music venue, which opened earlier this year in the old Duling School in Fondren.

"It's a variety show," Glen said Thursday night at a media event staged to unveil the venue's upcoming plans. The show will feature live music and audience interaction. Glenn wants the show to "showcase Jackson, Mississippi, in a different light"--presumably meaning focusing on the city's renaissance rather than its crime and poverty.

The Auditorium also introduced their large high definition screen that will feature concerts of national and regional artists. The HD setup, installed by Peavey in Meridian, includes surround sound and Blu-Ray technology. The Auditorium is featuring movie nights every Tuesday and Thursday starting Aug. 11 with the Morgan Freeman film "Seven." The venue also plans to offer independent films.

This is GREAT! I hope that this will turn into a real male version of Paula Dean. Good Luck, Nathan!!