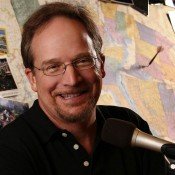 Radio quipster Michael Feldman has been compared to Groucho Marx, though without the cigar and brothers. A lapsed schoolteacher and failed cab driver, he has been hosting the comedy quiz radio show "Michael Feldman's Whad'Ya Know?" since 1985.

The nationally distributed program airs every Sunday at noon on Mississippi Public Radio. Feldman will bring his Madison, Wis.-based program to Columbus, Miss., Saturday, Dec. 12, for a live broadcast from the Rent Auditorium at the Mississippi University for Women from 10 a.m. until noon and the show will be rebroadcast Sunday, Dec. 13, at noon. He previewed the Columbus show in a phone interview.

Can you give us a hint as to what you're going to say about Mississippi?

I'm still working on it. I like Mississippi. It's the one place you can go where women will put their hands on your arm when they talk to you. Their husbands will be standing there, and the wives touch your arm. For a guy from the north, where women don't touch men, it's quite a thing.

When I first did a show in Jackson a few years ago, women were touching my arm, and I thought, "I am really hot." Then I noticed they were doing it to everybody.

Did that realization bother you?

I can live a lie.

How often have you been to Mississippi?

We did two shows in Jackson, two in Biloxi, one in Oxford. I still have my Mississippi yarmulke (Jewish skullcap) someone gave me an Ole Miss yarmulke. Everyone's nice in Mississippi. It may be just polite, but I like it. People are nice and open and sociable.

Do you find that your show attracts the same kind of folks in the audience no matter where you broadcast?

What can people expect to see if they attend the show?

They'll see some aging individuals who apparently are doing it by rote, they've been doing it so long, the oldest of which will be Jim Packard, our announcer. I'm the young guy sitting next to him. We'll have Clyde Stubblefield, the "Funky Drummer" (so called because he recorded the song "Funky Drummer" with James Brown's band). He comes on the road with us to play with pianist John Thulin and bass player Jeff Hamann. We'll have a stage set up with Mississippi artifacts and visuals. Otherwise, it's a radio show, so there's not much to see. There's an applause sign, which we need. The show will be pretty much Mississippi-oriented.

You're an author, too. Are you planning a memoir?

I've written a couple of books, and when you add them all up, it's a very thin memoir. So it's out there. It's probably all owned by Google.