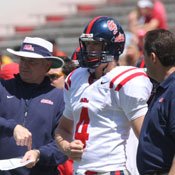 This might be remembered as the year they drove ol' "Dixie" down.

First, Ole Miss Chancellor Dan Jones told the band it couldn't play "From Dixie With Love" anymore because fans refused to quit shouting, "The South will rise again!" during the fight song. Ole Miss fans hate it when people try to get progressive. Outraged KKK members showed up on campus before the LSU game on Nov. 21 to protest. Some members wore red and blue robes, but Doctor S is sure that was just a coincidence.

Then Ole Miss concluded the regular season with a humiliating 41-27 loss to Mississippi State in last Saturday's Egg Bowl in Starkville. And the game wasn't as close as the final score. MSU even took a knee inside the Ole Miss 10-yard line in the final minute of the game. That had to be worse for the Rebels than another Bulldog touchdown would have been.

Afterward, Ole Miss coach Houston Nutt offered the lame excuse that the Rebels couldn't get up to play the Bulldogs, who had lost their last two games.

"We used a lot of energy, a lot of bullets in the last couple weeks (in victories over Tennessee and LSU)," Nutt told the Biloxi Sun Herald.

So what happened, Houston? Were the Rebels unmotivated or just uninterested? How does that happen against your archrival?

It looked like the Rebels were out-coached, particularly in the second half. Ole Miss couldn't stop State's 1-2 punch of quarterback Chris Relf and running back Anthony Dixon. The Bulldogs finished with 24 first downs and 317 yards rushing.

My question to first-year Mississippi State coach Dan Mullen: Why didn't you use Relf more this season?

Mullen was hired a few days after Ole Miss beat MSU 45-0 in Oxford last year. Mullen never pretended that the Egg Bowl was just another game. Before the season, he put a clock in the MSU locker room that was counting down to game time on Nov. 28. And he has refused to call Ole Miss by name (not even "Mississippi," as Jackie Sherrill used to do). Instead, Mullen calls UM "that school up north," borrowing legendary Ohio State coach Woody Hayes' name for Michigan.

After his team's victory last Saturday, Mullen wasted no time ramping up the rancor for next year's Egg Bowl (if that's possible). As MSU players and fans celebrated, Mullen grabbed a microphone and yelled, "There's certainly one program in this state that's definitely on the rise, going in the right direction, and that's right here in Starkville."

Mullen was taking a shot at Nutt, who earlier in the week had said, "There is one program in this state that is getting very strong." Not strong enough to beat State in Starkville, however.

The loss capped what might be Ole Miss' worst 8-4 season ever. Normally, eight victories would be cause for celebration in Oxford. But the Rebels and their fans expected so much more. The Rebels started the season ranked in the top five in most polls and manyincluding Doctor Spredicted Ole Miss would win the SEC West and go to the school's first SEC Championship game.

Saturday's loss likely ended the Rebels' hopes of a trip to the Capital One Bowl on New Year's Day. The Rebels will probably go back to the Cotton Bowl.

In retrospect, the Egg Bowl's outcome seems almost inevitable. MSU, which played the toughest schedule in the nation, was facing its sixth ranked opponent at home this season. The Dogs (5-7) played close in losses to LSU, Houston and Florida. You had to figure that their luck would change.

Meanwhile, Ole Miss hadn't beaten a team with a decent rushing attack this season. And the Rebels probably would have lost to LSU if Tigers coach Les Miles wasn't an idiot.

"It's a sick feeling," Nutt told the Sun Herald before the Rebels high-tailed it out of StarkVegas. "It's not what we planned, and it's not the intention we had for these guys. We wanted to go out the right way, and you've got to give them credit. They did a good job."

And "that school up north" was left singing the blues, not "Dixie."

I love his column, Dr. S. Probably my favorite of you of all times. Mullen is the man. I wish him great success. Mississippi need the right so-called big school to do well for national image and racial reasons. Believe me that other school isn't the right one. Southern Mississippi is good for the image of Mississippi too.

Best column lead ever. I'm surprised no angry Ole Miss fans have shown up with torches, yet. ;-)