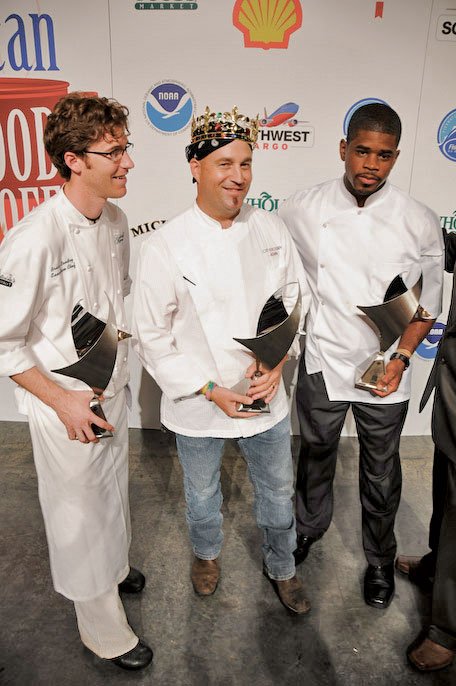 I'm glad to represent Mississippi and its people that I love. I can't see myself ever leaving Oxford, but I didn't understand what a sense of place was like prior to Hurricane Katrina. There's no way to adequately describe what the feeling was like watching that happen to my hometown.

I told my staff immediately, "I've got to go somewhere, whether it's the Coast or New Orleans֖I'd never be able to live with myself if I didn't." I've been insanely fortunate since we opened City Grocery; my management staff is just unbelievable. My involvement in renovating the Willie Mae's Scotch House restaurant in New Orleans for 18 months was almost a matter of destiny that availed itself. Now 92, Willie Mae was running her business for 50 years right up until Katrina.

Could you read the judges' reaction to your dishes?
These judges were absolutely ice cold in their expressions. I had no idea at all what the outcome was going to be, especially the second day because other guys used higher concept, fancier foods while we focused on being accessible to the home chef.

You are on a stopwatch to get everything to converge֖hot and cold components arranged within a large dish on these crazy, rectangular plates֖until that final moment. The nice thing was that my sous chef, Heath Johnson, and I were told we'd start at 11:30 and had three extra hours. At the same time, it exploded the anticipation. It seemed like there were about 500 cameras alone and hundreds of people.

What did you do with your crown and how does it feel to be king?
It's in the back seat of my wife's car. I was forced to wear it to dinner with a bunch of friends in Oxford after we returned. It will likely come to rest at my friend's watering hole in New Orleans where I always stop. It's fantastic to be king֖fun but exhausting. I didn't recover until mid-last week, then packed for a breast-cancer dinner benefit in New Orleans.

Tell me about Big Bad Breakfast that you opened in May.
Breakfast is so overlooked, and nobody seems to pay it much creative attention. I have friends who are super talented writers here, and that's how it unfolded. We said, "Why don't we name the dishes after Mississippi friends' novels?"

What's next for the King?
If the guv calls again and sends me somewhere, I'm sure I will go, but that's not necessarily my bag at all. I much prefer being in the kitchen and entertaining at the restaurant. I did an Iron Chef right after Katrina to raise money.

My friend (Joe York) is an incredible documentary filmmaker and has been pushing me to do a travel show. We're going from town to town in the South two weeks from now for the pilot episode, asking chefs their favorite places to eat when they're not working. It will pull the curtains back on guilty pleasures, give restaurants press and give the chefs exposure. A lot of that came from the idea that Willie Mae's has become this tourist destination as a result of his project.

Much of my travel is work-related. I'm riddled with this second-hand Catholic guilt: My wife and I rarely go anywhere where it's just purely vacation.