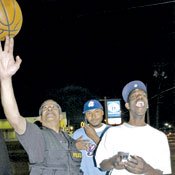 "Idle hands are the tools of the devil." At least, that's what city officials like Mayor Frank Melton and Ward 3 City Councilman Kenneth Stokes seem to think about Jackson youth.

On March 23, 15-year-old Alfred Hawkins was fatally shot around 2 a.m. while, as The Clarion-Ledger reported, "hanging out" on a street corner. When the shooting took place, he was only guilty of breaking the city curfew for young people under 17, which prohibits them from being out past midnight on weekends.

The curfew has been in effect since Stokes pushed for it in 2001. He argued that it would keep Jackson's youth safe and out of trouble.

"Young people want excitement; they see a fight, they want to go see it. Or (drug dealers) will start using young people, because they are juveniles, to sell dope," Stokes said in 2004.

Teenagers do get into fights, but Stokes' statement makes the city's youth out to be simple-minded and predictable, as if watching a brawl meant they have nothing better to do.

Teen idleness and drug dealers are well-defined motifs in Stokes' ideology, it seems. In June, when Melton asked for $1.2 million to fund a youth summer-jobs program, Stokes defended the endeavor, saying, "If the city does not step up to the plate and do what's right, you can bet these dope boys will offer them a job."

There is a large leap between working for public and private businesses and pushing drugs on the streets, and an even larger one between youth who would turn to crime to make money and the everyday teenager willing to work at a restaurant or grocery store to earn extra funds. Stokes has trouble discerning between the two, and his fellow city official, Mayor Frank Melton, has similar trouble identifying the nature of Jackson youth.

Melton displayed his typical "kick ass for the greater good" attitude when addressing the unprecedented 900 young people who came to the Greater Tree of Life Baptist Church for the program's interest meeting on June 14.

Melton had just addressed the young men in the audience and told them to take out their earrings and leave them at home. When one young man in the audience asked what would happen if he left his earrings in, Melton replied, "I'm going to take you and beat your butt," implying that the increasingly commonplace practice of men getting their ears pierced was a flaw in youth behavior similar to that of a misbehaving toddler.

Why would the people claiming they are working to better the lives of youth associate them with drug runners? Melton has worked with the area YMCA for several years, and Stokes has been known to orchestrate trips for at-risk youth, but both men's biases seem to overpower their initial ideas that youth can be kept on the right track by personal interaction.

It is not good practice to treat those who will soon be adults as if they need to have decisions made for them to prevent them from running rampant and becoming unsuccessful. But that is exactly what local government figures like Melton and Stokes are inadvertently doing in front of media outlets. Their comments about the city's youth only damage the image these leaders are trying to create of disadvantaged youth rising above the life of crime and poverty that is expected of them.

Susan Womack of Parents for Public Schools says adults falter in communication with youth when they generalize all youth and talk about youth instead of to youth.

Young people cannot be forced into a category that does not fit them. Some young people are straitlaced; some are rebellious; and some are in-between, and that's OK. Jackson has a crime problem, and that makes every involved adult, whether they are involved in the government or not, worry. Worry often turns into uncertainty, and uncertainty can turn into an answer that satisfies the worrier. The broader the answer, the more comfort and satisfaction it gives.

This process of our city government stereotyping Jackson youth will only stop when the adults and young people of this city stop buying in. It should not be a surprise to discover that there are youth just itching to discuss the direction of their peers and the city, and adults who find themselves wanting to listen because they have forgotten the aphorism "out of the mouths of babes comes wisdom."

Neither Melton nor Stokes returned calls for this story.

Screw Friendship Bracelets
Eyes on the Machine: Jackson Teens Cover the Media
Editors Speak Up
'Yes, We Can'
The Mouth Of Babes
Intentional Bias
Now What?