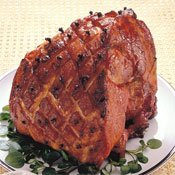 This is the easiest, tastiest ham I've ever madejuicy and flavorful. And if you use a crockpot, it is almost no work!

Place trimmed ham in a crockpot or in a cooking bag in a shallow pan; pour soda and spices on top. Cook on medium heat (crockpot) or in a 325-degree oven 25 minutes per pound or until a thermometer inserted in the heavy part of the meat reads 160 degrees. Remove from pan and drizzle with marmalade.

My friend Margaret Graham gave me this recipe after bringing the casserole to an office potluck. It's a fantastic twist on the traditional holiday green bean casserole.

Sauté onion, celery and bell pepper in a small saucepan. Combine the sautéed mix with vegetables, soup, sour cream and cheese and pour into a two-quart buttered casserole dish. Combine the crushed crackers and melted butter, and sprinkle on top of the casserole. Bake at 350 degrees for 45 minutes or until bubbly and golden brown.