The Pride of the Alamo | Jackson Free Press | Jackson, MS

The Pride of the Alamo 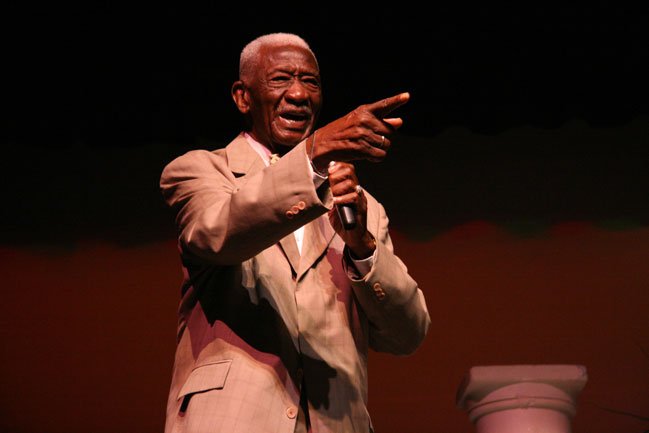 Jobie Martin is the former announcer for the Alamo Theatre. Photo by Cheree Franco

When she was about 12 years old, Dorothy Moore's aunt would take her to the Alamo Theatre on Farish Street every Wednesday night to sing in Jobie Martin's talent show. She remembers how Martin towered over her in height. Backstage she would worry about the microphone being too tall when it was her turn on stage.

"Don't worry about that, baby. I'll let it down for you," Martin told her in his soft, soothing voicethe voice of the Alamo Theater for so many years.

"I always sang the blues at the talent show," Moore recalled. "I never remember losing."

On Thursday, May 22, Martin and Moore graced the Alamo stage once again. Moore, quite a bit taller now, didn't need her mic let down. But one thing remained the same: Martin introduced the singer as a prizewinner. Moore and the Alamo Theatre were honored with a marker on the Mississippi Blues Trail.

The ceremony on Thursday began with a tribute to Moore in the only way that truly fit: with song. The choir from Lanier High School, Moore's alma mater, sang her praises with two spiritualsthe first kind of songs Moore learned to sing as a little girl in Jackson.

Evelyn Silas, Moore's classmate and friend, reminisced about the good times they had together singing in Lanier's choir. Silas credited their choir director, Naomi Sams, as "instrumental in helping develop Dorothy's beautiful voice that we hear today."

"She's done such great things and has so many more places to go," Silas said of Moore. "She's never forgotten where her roots arenever will."

Those roots are still firmly planted inside the theater at 333 North Farish St. After winning every Alamo contest she ever entered, Moore was offered a recording contract and became lead singer of the vocal group the Poppies. In the late '60s, shortly after her gigs at the Alamo helped land her a recording deal, she began working with Jackson's Malaco Records, and in 1976, recorded her Grammy-nominated single, "Misty Blue."

"I learned a lot about stage presence performing on this stage," Moore said.

She's not the only one. First appearing in the Historic Farish District in 1915, the Alamo Theatre served as a hub of entertainment and culture for the African American neighborhood during Mississippi's era of segregation. Many significant artists have graced the theater's stage, including Elmore James, Tiny Bradshaw, the Swinging Rays of Rhythm from Piney Woods School and even Nat "King" Cole, who, while performing at the Alamo, received the news of daughter Natalie's birth.

Thursday's indoor ceremony ended with a presentation of plaques to honor Moore and the Alamo. As Martin held his hand above Moore's head for the audience to judge her once again, now for her lifetime performance, the crowd at inside the Alamo rose to its feet with applause and steadily made its way outside to Farish Street, in front of the theater.

Just as the last few people made it out the Alamo's front doors, a strong rumble of thunder boomed directly overhead. Looking up to see the covered blues marker on the corner of Farish and Hamilton, the audience saw raindrops come into view, too.

Everyone crowded under the overhang of the Alamo on the tips of their toes to get a glimpse of Dorothy Moore, escorted under cover of umbrella, as she tugged at the black fabric to reveal her mark on the Mississippi Blues Traila piece of history she will forever share with the special place where she never lost a talent contest.

Way to go Dorothy Moore. Mrs. Naomi Sams (Lanier's Former Choir Director) was a taskmaster at the piano, always driving her students to do their best and never, never accepting anything less. She never allowed us to slouch and taught the finer lessons of choral music to many Lanier students. There's so much history at the Alamo - its always great to learn something else.