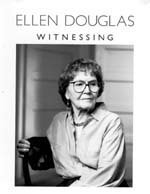 I admit that I haven't finished reading every essay in Ellen Douglas' amazing new book. I simply can't bear for it to end. I read a couple of lines, then close my eyes to let them fully sink in. It is almost unbearable to be so entertained and challenged.

In "Witnessing" (University Press of Mississippi, 2004, $28), Jo Haxton, writing under the pen name Ellen Douglas, has compiled a selection of essays—some published before and some not. Though she is in her 80th year, this is not a walk down a sentimental memory lane.

"Witnessing" is something else entirely—the fresh and spirited writings of an artist by character, talent and intent to be unflinching.

It is a journey undertaken by author and reader, as though Douglas is saying, "See? See? Did you ever think of that?" And no, I never did. But in reading "Witnessing" I could feel the tug of discovery, as surely as if a flesh and blood hand was gripped tightly around my own, impelling me from page to page, this thought to that revelation, this remembered place to that newly realized one.

It is not a "Southern" book, though it dwells extensively on Southern writing and writers and what it was like to be a blossoming writer during the zenith of Eudora Welty and William Faulkner. "Witnessing" is a book about writing, how a writer learns his or her craft, the things that peel away and the things that stick. It illuminates the burden and glory of writing in Faulkner's shadow, and of how the young Douglas had to come to know his writing before she could throw it off and discover her own voice. Now a woman in full control of her writer's voice, Douglas retains a toughness of mind and acuteness of observation that writers of any age will envy.

Several essays tell of her infatuation with Faulkner's work, followed by a long period of disillusionment that she likens to the end of a love affair. The literary analysis is a revelation, made so by her intensely honest insights. She says: "From my point of view as writer first, before I am reader, something else happened. Faulkner was no longer useful to me. His work bored me, in part, not because it was intrinsically boring so much as because I had my attention on other writers who either continued to be useful or who became useful in the same terms that Faulkner had been. … But at the same time something was happening to Faulkner's work as well as to my perception of it. More and more, during those years, it seems to me, he wrote glosses on his own works, books that said, 'After all, I didn't quite mean what I wrote earlier…. Let's change the past—my past, the past I have created.'"

In the preface, Douglas says this about being a witness: "Being female, I had always been interested in the lives, the difficulties, of girls and women ever since I first tried to kiss my elbow and turn into a boy. And of course my reading and writing and thinking, particularly after the Supreme Court ruled on Brown v. Board of Education, were inextricably bound up with the political as well as the human aspects of conflict in the South. These were and remain overwhelming issues for American, and especially for Southern, writers. They sound the ground bass under every word I have written and spoken. But it is also true that my stories and essays have always been first about human lives, about my modern Uncas and Chingachgook, about the collisions of character and fate."

"Witnessing" is as transformative for writers who want to know more about the process as "Negotiating With the Dead" by Margaret Atwood. But for a Southerner, it is a precious opportunity to draw closer to the thoughtful observations of a singular Mississippi writer, who never lets up, never glosses over, never sentimentalizes, but always makes you laugh and cry, sometimes at the same time.

Ruth Campbell Williams is the co-author, with Jeff Durstewitz, of "Younger Than That Now, A Shared Passage from the '60s" (Bantam/Doubleday/Dell, 2000). She lives in Flora, Miss.