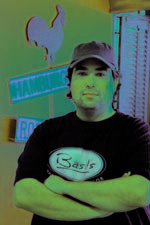 When Nathan Glenn, now 29, was growing up, his parents would check him out of school to "help toast bread or wash dishes" at one of their restaurants. After graduating high school, he went to Hinds Community College for a few years to pursue a business degree, but quickly realized that the restaurant business is his calling.

His family already owned a Rooster's downtown, so five years ago, Glenn opened a new Rooster's out on Cooper Road. In the past couple years, though, he has taken the Fondren Corner building by storm with his triumvirate of food places—another Rooster's, Basil's and the newly opened Shakes.

And he loves the building, where he is omnipresent, cooking fries in Rooster's, carrying out pasta to tables from Basil's. "They are so different from each other and still creative," he says of the other Fondren Corner tenants. "Everyone is really rocking here."

The rocking "everyone" includes him. During our interview in the Fondren Corner lobby, at least 10 people politely interrupt to ask Glenn questions about one of the restaurants or the Capri Theater Halloween party he helped organize. But he doesn't look stressed out. Just happy.

When he first opened Basil's, he did months of research to bring something more innovative than a sandwich to Jackson. Enter the panini. "It's hard to reinvent the wheel in the restaurant business," Glenn admits. "When we first started marketing the panini, we had to educate people about what exactly it was."

Once people tasted the panini (which is Italian for "thin bread"), Basil's quickly became one of Jackson's most popular lunch spots. The price isn't so bad, either. For the especially spend-thrift (or just non-meat-eating), the Veggie only costs $2.95.

But food isn't his only jive. He also throws a mean party, which he did this past weekend with other friends from the Fondren area in old Capri theater. Money made from the Second Annual Voodoo Theatre party Glenn co-hosted will go to fixing up the Capri. And next week, he'll be at the Mississippi Museum of Art helping with "Art on Tap." Glenn is also shooting a pilot for an "eating, drinking and living in the New South" cooking show.

Glenn isn't going anywhere. "I love the South," he says with a grin. "Jackson is a new, hip south. We're getting away from racism and those other negative things. I've looked at different cities, but they just don't compare. There's a real loyalty here."