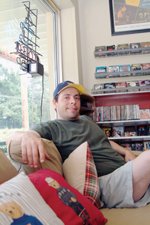 Before Richard Weiss, 36, got busy providing art house and other indie films to Jacksonians, he worked in the tech industry. After cutting his teeth renting foreign films at Video Library, Weiss started making databases of the movies he had seen and ones he hadn't seen but wanted to. Even though Video Library offered a wide selection, Weiss wanted more: "I noticed that there were a lot of things on DVD that they probably could never carry."

After finding Ro Sanchez, a worker at Hollywood Video in Pearl, Weiss decided to forego his steady salary at Venture Technologies to open his own store in Belhaven, Flashback Video Cafe. "I knew it was now or never," he says of his decision to open. "The security of a regular paycheck was great, but I realized that I was marching toward my grave." Since his children are still young, he figured he should make the financial leap now—before they start wanting expensive clothes and cars.

Once his brother David joined the project, they decided to augment the video store with sandwiches. Once Scott "Sandy" Sandlin stepped in to revitalize the café, the store was set. The menu is packed with unique combinations and ingredients that even left a native New Yorker, visiting the JFP last week, proclaiming, "That was the best sandwich I've ever had."

"We didn't want to do something that had already been done," Weiss says. "We wanted something special."

Maybe that's why he's offered his store up to community groups around Jackson. Citing The Collective and the recent "Fahrenheit 601" efforts, Weiss explains that the community feel in Jackson is exactly what he wants to be a part of now.

"When I was growing up, we all had the same complaints—that there was nothing to do in Jackson. The new generation is actually doing something about it, and I want to be a part of it," he says. "My dad always stressed the importance of community, and it's really important to me."

To feed the city's surging appetite for indie film, Weiss is starting a genre showcase, beginning this month with a film noir series. Weiss wants to spotlight as many local artists—of any medium—as possible. It's only through them, he notes, that Jackson can keep evolving. "It's the whole community working together that can propel each segment even further," he says. "Jackson has been the 'Bold New City' for as long as I can remember, but it's only now that I'm seeing it step up and be bold."
Flashback is at 1804 N. State St., across from Millsaps College. Call 352-3939 for more details.