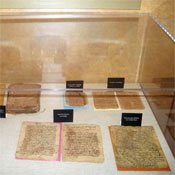 Contrary to popular belief, Timbuktu, Mali, was an epicenter of learning and scholastic advancement in the 15th century. The "Legacy of Timbuktu" exhibit at the International Museum of Muslim Culture celebrates the region's contribution.

Book selling was a profitable enterprise in the oft-mythicized but very real city of Timbuktu. In the late 15th century, after the emperor Aska Mohammed's reign, the city was at ...