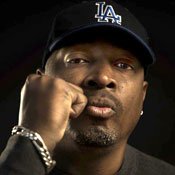 Chuck D, the front man of the once largely successful hip-hop group Public Enemy, has often been media's "go to guy" on all things hip-hop.