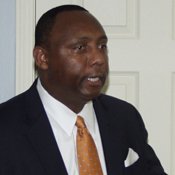 To hear Gov. Haley Barbour tell it, if he doesn't get his way, the state's fiscal crisis could force thousands of felons out of jail and into communities. Since his ...