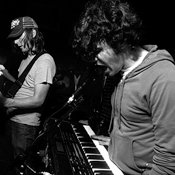 It's spring break in Jackson, and that means the Sweet Potato Queens are here, ready to show off their greenery for Mal's St. Paddy's Parade on Saturday. After the dreary ...