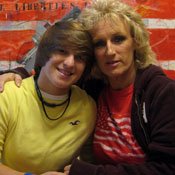 The ACLU has taken up the fight of lesbian Wesson Attendance Center student Ceara Sturgis, pictured here with her mother, Veronica Rodriguez, who wants her photo in the yearbook.

The American Civil Liberties Union and the ACLU of Mississippi filed a lawsuit against Wesson Attendance Center in Copiah County today demanding compensation for damages and attorneys' fees after the ...

The ACLU of Mississippi says the Copiah County School District was wrong not to allow a lesbian student to place a yearbook photo.