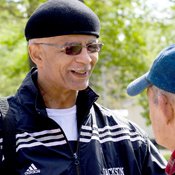 Civil-rights attorney Chokwe Lumumba wants to apply his background as an organizer and activist on the city council.

Instead of pushing for an investigation of Council President Frank Bluntson's use of city employees during last night's Jackson City Council meeting, Ward 2 Councilman Chowke Lumumba defended his push ...

Mississippi Immigrants Rights Alliance legal counsel Patricia Ice will appear before the Jackson City Council Tuesday at 6 p.m., to call for an anti-racial and immigrant-profiling ordinance.

In the wake of Ward 2 Councilman Leslie McLemore's decision not to seek re-election, eight candidates are vying to replace him. They offer similar views of the ward's needs but ...