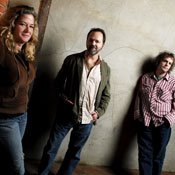 Alt-country pioneers Blue Mountain have been through it all in the nearly two decades since they formed in Oxford, Miss.: changes in lineup, underwhelming management, tough salad days, success and ...