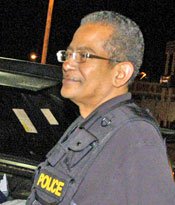 Melton: ‘We Tore That Shit Up'; Prosecution Rests

FEDERAL COURTHOUSEThe prosecution in U.S. v. Melton started Day 4 of testimony in downtown Jackson today by calling Joe Lewis, who is with the city's Community Improvement Division and is ...

Feds Fire Back at Melton

In a brief filed Monday, Dec. 1, federal prosecutors argued that the purity of Jackson Mayor Frank Melton's motives has no bearing on his trial for civil-rights violations. Their motion(PDF) ...

Two council members say Jackson Mayor Frank Melton has enlisted a Louisiana company to do rogue debris removal work in the city. "These guys were on the street all over ...