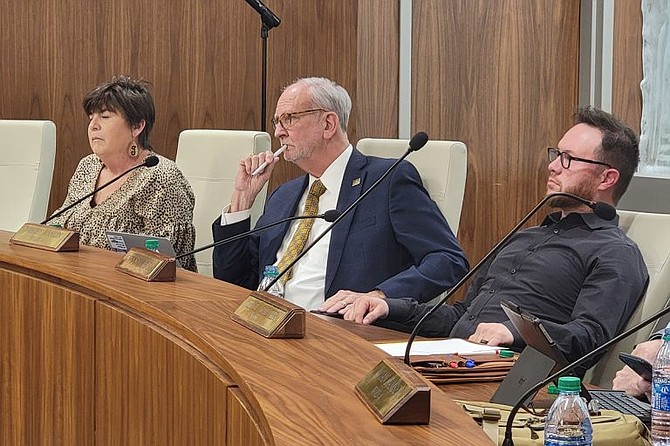 After a boisterous and contentious public-comment period regarding LGBTQ+ books in the Ridgeland Public Library, the city’s Board of Aldermen released a statement indicating that they were sending a new contract to the Madison County Library Board. They had not released the details as of mid-day on Feb. 16, 2022. Photo by Nick Judin

RIDGELAND, Miss.—Amid pleas against censorship and claims of pornographic “filth,” a Ridgeland Board of Aldermen meeting scheduled to address the city’s library contract quickly morphed into a raucous referendum on LGBTQ+ books and the actions of Mayor Gene McGee. Twenty speakers took to a podium in front of a packed hall last night to speak their part before the board departed for an executive session, deliberating for over two hours out of the public eye.

The meeting was a culmination of controversy that went public after the Mississippi Free Press reported on Jan. 25 that McGee was withholding funding for the library following complaints about LGBTQ+ books.

It also revealed where and how the book-banning and funding controversy began.

During last night’s public comments, Phelps Dunbar attorney Cal Wells claimed responsibility for the initial complaints. “I’m the one who saw this display,” Wells said, “and I was shocked. I saw ‘Love is Love’ … ‘Queer Christian Survival.’ ‘As a Woman,’ about transition … ‘Queer Bible,’” said Wells, who is chairman of the board of directors for the Mississippi Center for Public Policy, a conservative, free-market think-tank based in Mississippi.

Wells said he asked a staff member how books were selected for the “display,” and was told that the books were simply new arrivals. “All I saw was books that had one agenda. One agenda!” Wells said. “I want those people in a courtroom under oath. Did you have an agenda?”

“In the biography section,” fired back Kayla Murchison, a former librarian from the Ridgeland Public Library in the audience.

Despite the high tension of the testimony, the result was mostly anti-climactic. Negotiations among the board members, occasionally involving the input of Madison County Library Board counsel Bob Sanders, stretched late into the night. At 10 p.m., four hours after the meeting began, the board returned to the chamber, having foregone a formal vote, and presented a statement to those remaining.

“The Board of Aldermen has not withheld, is not withholding, and will not withhold money because of any books in the library system,” the statement began. “There is currently a dispute between the Parties as to whether a valid contract exists. The City is requesting to enter into a new contract that would give the Board the authority to make the contributions,” it continued.

The rest of the statement added that the aldermen’s counsel would enter into “good faith negotiation” with the library board, toward the “mutual goal” of a citizen-funded library. The statement echoes brief comments from Mayor McGee himself near the end of the public comment period, when he stated plainly that he did not intend to ban or censor books.

That contradicts the testimony of Library Board Director Tonja Johnson, who stood by her statement that the mayor had expressly demanded the removal of “homosexual materials” before releasing the library funds.

While the Ridgeland Board of Aldermen may have expressed a collective opinion with regards to censorship and book removals, the mayor’s own words to the Mississippi Free Press place his decision to defund the library as a reaction to citizen complaints over “sexual content,” the mayor’s euphemistic term for a loose collection of human-interest books on LGBTQ+ culture.

Those books included The Queer Bible, a series of essays by LGBTQ+ celebrities such as Elton John and Tan France on other queer icons who inspired them, as well as Grandad’s Camper, a children’s book about a child learning about her grandfather’s late husband.

Now, however, whatever the mayor and aldermen may have said, the only real gauge of the City of Ridgeland’s intent toward the collection at the Ridgeland Public Library will be the specific language of the proposed contract, which is either not formally drafted or not yet available for public scrutiny.

The board’s decision to forego a vote at the end of last night’s public session means that minutes from that discussion will remain a private matter.

What remains public are the testimonials of a widespread group of out-of-state activists and Madison County residents, speaking alternatively in defense of the Ridgeland Public Library, freedom of information, the mayor and the board or a renewed spirit of censorship and homophobia, as this reporter captured in a long Twitter thread throughout the meeting.

One of the first speakers was Tonja Johnson herself, speaking directly to McGee in a public forum for the first time since the defunding of the library.

“We do not exclude an item based solely on its content or subject matter,” Johnson said. “It’s up to each of us to decide what is best for our own children, our own families,” she continued. “It’s by providing a diverse collection with different viewpoints and perspectives that we empower families to make choices. … When you take that right away from one of us, you take it away from all of us.”

Johnson declared that the diversity of the library’s collection was intended to reflect the community it is situated in. “Everyone’s story deserves to be told. No one should be made to feel less than. Community spaces should be places where everyone feels welcome,” she said.

Some speakers—like Teresa Gerald and Jane Bond—were from the Friends of the Ridgeland Library, a group supporting the institution that has raised over $110,000 to offset the potential loss of the defunding. Gerald told the board that the City’s actions had resulted in a nationwide outcry—to which a board member retorted that the aldermen had yet to take any action whatsoever.

Frank Rogowski’s comments represented speakers there to “applaud the mayor’s efforts to ban certain filth out of our library.” To Rogowski, LGBTQ+ content of the kind in the Ridgeland Public Library was pornographic. “We’re seeing more and more pornography, more and more filth in our society, and our social norms,” he said.

For some of the commenters, the mayor’s actions, and the possibility for censorship of LGBTQ+ material was far more personal.

To Alice O’Neal Gratenhuis, demands to hide away LGBTQ+ material, or to remove it entirely, reminded her and her wife of a lifetime of cruelty. “I grew up terrified,” she said, “because of the blank smiles of those who would rather their child be dead than gay.”