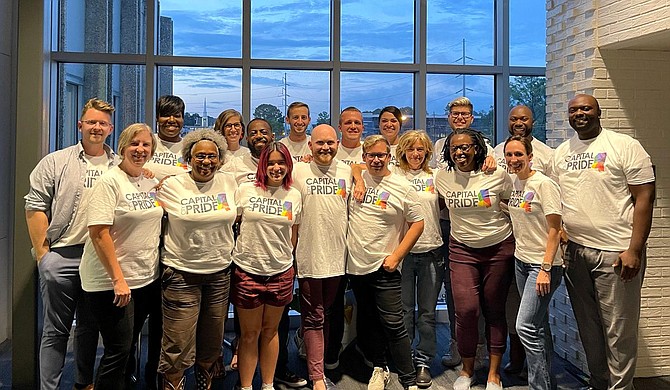 Capital City Pride works to promote unity and inclusion during its community-engagement events supporting the LGBTQ+ community, such as this weekend’s “The City With Pride” extravaganza. Photo courtesy Capital City Pride

After spending its first year of operation limited at every turn by the COVID-19 pandemic, Capital City Pride is prepared to host one of Jackson’s first large-scale events since March 2020.

“The City With Pride” will span the entirety of this weekend, the first weekend in October, beginning with the 2021 Pride Kickoff Gala at Ecoshed, where Jerred Price under the name “Almost Elton John” will serenade the LGBTQ+ community and its allies. Tickets cost $100 per person. Doors open at 5:30 p.m., and the event lasts from 6 p.m. to 8 p.m. Shortly afterward, from 9 p.m. to 12:30 a.m., Ecoshed will host the official pride kickoff party, which has a $10 cover and will feature pop-up drag shows throughout the night.

The weekend’s largest function—The City With Pride 2021, an all-day festival for all ages at Smith-Wills Stadium—is open from 10 a.m. to 7 p.m. on Saturday and is completely free and open to the public. The festival will feature nine bands performing live music, as well as over 30 drag queens from all over the South. Only clear bags or small clutches will be permitted inside. No outside food or drinks are allowed.

At 3:30 p.m., Capital City Pride launches the city’s first pride march in over a decade. Marchers will meet on the corner of Commerce Street and East Pascagoula Street and trek through the downtown area before returning to Commerce Street in front of Hal and Mal’s, where the final block party will take place from 4 p.m. to 8 p.m. free of charge. 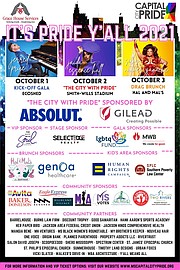 Capital City Pride executive director Jason McCarty says that having so many elements of the festival be free and open to the public is in-line with the group’s message of inclusion and diversity.

“People can come together and leave politics and nonsense aside,” McCarty says of the weekend’s scheduled activities. “People here in Mississippi especially may not be ‘out,’ but they may feel really safe joining an event where they know they can be themselves.”

This creation of a “safe space” for the LGBTQ+ community in Jackson will also extend to its health protocols, as organizers of “The City With Pride” are requiring proof of vaccination or a negative COVID test within 48 hours of the event and are requesting that attendees wear masks.

“We want to set the tone for how big events can be produced in the era of COVID,” McCarty states. “We’re the first event of this size (since the onset of the pandemic, he claims), and we are following all of the city of Jackson’s guidelines.”

McCarty is hopeful that the event’s grand scale will lend itself to a boom in fundraising, as Capital City Pride is planning to donate 100% of the proceeds from the three-day extravaganza to Grace House, a local organization that provides housing to people living with HIV/AIDS and women with chemical dependencies or who are fleeing domestic violence. “We chose them as our beneficiary because we believe they have the same values that we do,” McCarty remarks. “They want to find and meet people where they are.”

This commitment to underserved communities is particularly vital in the capital city, where McCarty says that most LGBTQ+ organizations are either political or social services. “We were founded for community engagement, to bring people together,” he says. “We create events where people can come together to be themselves.”

Hosting events like “The City With Pride” provides a gift that’s often scarce in the LGBTQ+ community, who McCarty acknowledges faces “stigma and the possibility of not being accepted,” which leads to soaring suicide and self-harm rates among lesbian, gay, bisexual and/or transgender people.

“LGBT people are damn good people,” McCarty proclaims. “We are just like everyone else. Some of us go to church on the weekends. Some of us are married and have kids.”

Providing a path toward unity even in the face of such stark injustice and overwhelming odds to the contrary is the lifeblood of Capital City Pride and its allies, many of whom McCarty says will be on-hand at the weekend’s events to do something as simple as “give hugs” to Pride-goers, and he encourages his fellow Jacksonians to offer a message of solidarity throughout the weekend.

“I challenge anyone who has never been to a Pride event to come and see how much love and compassion goes into (the event),” McCarty says. “If you need us, reach out, and we’ll connect you.”

“The City With Pride” event takes place from Oct. 1 through Oct. 3. All-access passes can be obtained here, while individual events can be found here. For more information about Capital City Pride and its mission, visit mscapitalcitypride.org.