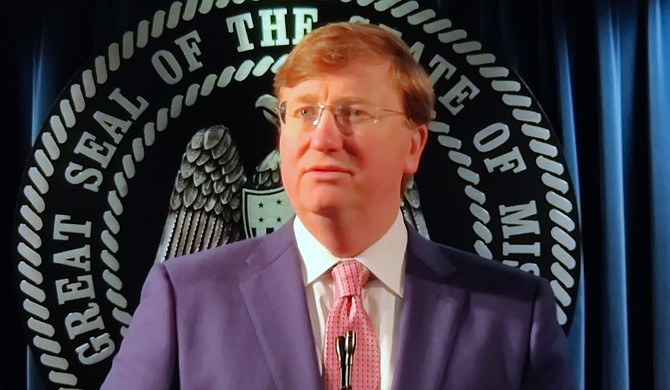 Mississippi Gov. Tate Reeves on Tuesday announced 16 projects that will be funded by some of the money the state received after the 2010 oil spill in the Gulf of Mexico. Photo courtesy Nick Judin

BILOXI, Miss. (AP) — Mississippi Gov. Tate Reeves on Tuesday announced 16 projects that will be funded by some of the money the state received after the 2010 oil spill in the Gulf of Mexico.

“One of my top priorities will always be ensuring that all funds meant for restoring our Gulf Coast, go strictly to our Gulf Coast,” Reeves, a Republican, said in a news release. “With the announcement of these 16 critically important projects, that’s exactly what my administration is doing.”

The new projects will cost about $62 million, adding to the more than $570 million already being spent for restoration in Mississippi after the Deepwater Horizon spill. The projects announced Tuesday:

— $6.6 million to build a mixed-use waterfront and commercial seafood harbor in D’Iberville.

— $5.5 million for improvement of wastewater quality and solid waste disposal from the shrimp processing industry.

— $5.5 million for restoration of Broadwater Marina.

— $5.5 million for a project to develop information technology.

— Nearly $5 million to repair and improve boardwalks and sidewalks along the beachside U.S. 90.

— $4.2 million for another economic development site at Gulfport-Biloxi International Airport.

— $2.2 million for a new building at the Hancock County Tech Park at Stennis Airport.

— $1.5 million for improvements at the Mississippi Coast Coliseum and Convention Center.

— $1.1 million for new, repaired or upgraded stormwater and wastewater systems.