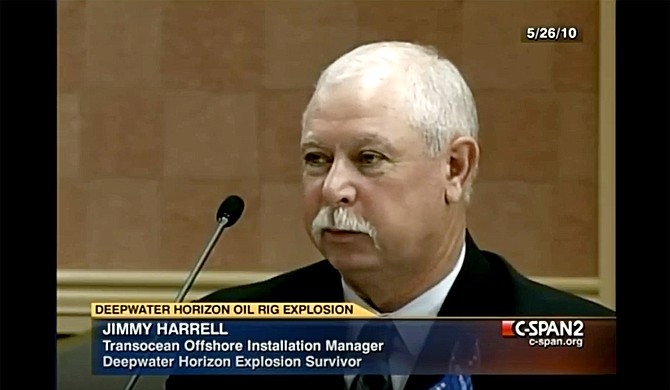 MORTON, Miss. (AP) — Jimmy Harrell, a supervisor on the Deepwater Horizon oil rig that exploded in the Gulf of Mexico in 2010, has died at age 65.

Harrell, who worked for rig owner Transocean, died Monday, according to Wolf Funeral Home in Morton, Mississippi. He had battled cancer for a year.

Eleven workers died in the explosion and 134 million gallons of oil spewed into the Gulf, fouling beaches from Louisiana to Florida, killing hundreds of thousands of marine animals and devastating the region’s tourist economy.

Harrell was a key Transocean supervisor on the rig leased by BP. Investigations indicated Harrell had been unhappy with the oil giant’s plans for shutting down the rig. During a May 2010 government hearing he acknowledged disagreements but denied reports that there were heated debates.

At his insistence, a key pressure test that had not been originally scheduled was run. But investigations found that others with Transocean and BP misinterpreted the results. A federal judge eventually said that BP ultimately was responsible for the misinterpreted results, one of the factors resulting in a ruling that BP was grossly negligent and bore most of the responsibility for the disaster. The judge also ruled that Transocean and Halliburton, which was tasked with sealing the well, were partially to blame.

Harrell's attorney, Pat Fanning, told WWL-TV that federal prosecutors tried to persuade Harrell to admit some criminal negligence and, as part of a plea deal, testify against two BP rig bosses. Harrell, who was portrayed by actor Kurt Russell in a 2016 movie about the disaster, refused.

“I said, ‘Jimmy, you’ll have to go into court and swear an oath and then testify that you were negligent. If you don’t, they’re going to charge you with 11 counts of manslaughter and gross negligence,’” Fanning told the TV station. “He prayed over the weekend and said, ‘I can’t do it. I can’t plead guilty and say I did something I didn’t do.’”

Harrell was never charged. Two BP supervisors aboard the rig were charged in connection with the test. One pleaded guilty to a misdemeanor pollution charge. The other was acquitted.

The horror of the explosion haunted Harrell for the rest of his life, according to the obituary provided by the funeral home.

“The explosion and loss of his employees and friends and the inferno that subsequently sunk the rig took a massive toll on his psyche,” it said. “He was never the same. When he wasn’t battling heavy bouts of PTSD, he found comfort in his favorite pastimes: hunting and fishing and simply being outdoors.”

It also said fiberglass was embedded in Harrell's skin following the explosion, and that he suffered health problems for years after inhaling the smoke and gas from the blast.