Smash Rooms Offer Safe Space to Let off Some Steam 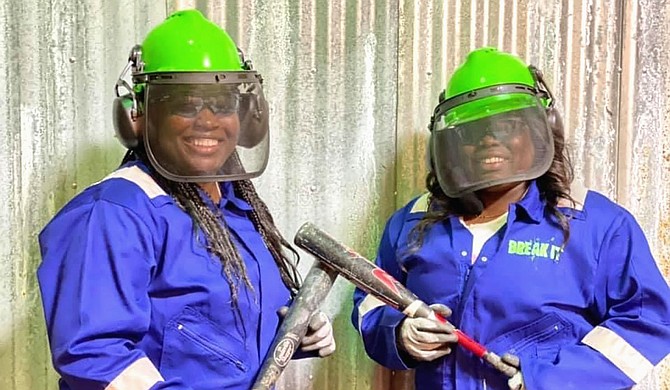 Break iT can be found at the Outlets of Mississippi in Pearl. Photo courtesy Break iT, LLC

Whether you find yourself having to deal with a painful breakup, a stressful job, a barrage of family hijinks, or anything in between, Break iT has the means for helping you smash your frustrations. Manager Jordan Wilson refers to the new addition to the Outlets of Mississippi as a therapeutic way to spend some time.

Open since late January, Break iT supplies items such as glass bottles, plates, vases, TVs and other electronics that customers can then brutally destroy in the business' "smash rooms" using sledgehammers, regular hammers, baseball bats, golf clubs or crowbars.

"We have all kinds of people in here," Wilson says. "Our first large group was eight women, and three of them had recently been dumped. They paired up and used all four rooms. They came out looking calmer and more relaxed. They were even smiling."

Break iT, which is modeled after a similar store in Missouri, provides customers with protective equipment including full-length jumpsuits, gloves, helmets and visors, which are all washed, steamed and sanitized after each use. The facility itself is also wiped down throughout the day, the manager said.

"After each customer (finishes), a team member cleans up the smash room," Wilson says. "It takes a while to really vacuum up all that broken glass."

The business obtains its smashables from local and other nearby businesses. Smashed items go to the dumpster out back, but Wilson is exploring recycling options for the near future.

"Right now, we get a lot of our empty beer and liquor bottles from Fannin Lanes, Outback, Kingpin, and Sal & Mookie's," Wilson says. "We buy the larger items, like TVs, vases, dishes and toasters, from Goodwill."

Only two customers may use one of Break iT's four smash rooms at a time. Sessions typically last around 15 or 20 minutes and range from $18 to $65, depending on the number and sizes of smashables. Add-ons can be added to any of the five packages for additional costs so that visitors can customize the collection of items they smash during their sessions.

Customers must be 18 years old or older to independently sign up for a smashing session. With the supervision of a parent or guardian, 16- and 17-year-olds may also use the smash rooms.

In addition, Break iT offers other activities such as "Smash Aisles," otherwise known as bottle baseball, the company's take on the carnival game whereupon participants smash and knock down stacked bottles using baseballs. The smash lanes are available for customers of all ages, and safety equipment is provided.

Visitors can also splatter canvases in Break iT's UV paint explosion room; sift through a bucket of mine dirt for geodes, arrowheads, fossils and more; and hit the arcade to play skee-ball, crane games, air hockey, foosball and classic arcade games.

To learn more about the business or to book a session, visit breakit601.com.