A Better Jackson, Thanks to These Women | Jackson Free Press | Jackson, MS

A Better Jackson, Thanks to These Women 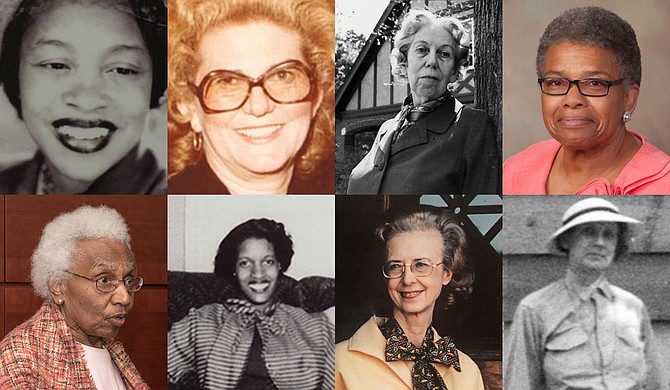 At the turn of the 20th century, women in Mississippi fought for the right to vote, assembling pamphlets and leaflets on the importance of women's enfranchisement, leading local suffragette Lily Wilkinson Thompson to remark that "an ounce of Mississippi was worth a pound of Massachusetts."

This Women's History Month, we remember these eight women who walked in the footsteps of their foremothers, working to elevate Jackson through their writing, their art and their study—and their belief that the state's capital city could be better than it was the day before.

Eudora Welty: One hot summer night in June 1963, white supremacist Byron de la Beckwith shot Medgar Evers in his own driveway. Fueled by her anger at the murder—which took place just 4.3 miles from her lush back garden—Eudora Welty sat down in Belhaven and wrote an imagined vignette from the point-of-view of the assassin, completing her first draft in a day. When The New Yorker published the story 13 days after Beckwith's arrest, it was considered such a hot-button topic that the publication declined to print the name of the story's setting: Jackson, Miss.

Evelyn Gandy: Evelyn Gandy had many "firsts:" the first woman to edit the Mississippi Law Journal, the first female state treasurer and the first female insurance commissioner—all before becoming the first woman to ascend to the lieutenant governor's office. While serving as the leader of the Mississippi Senate, Gandy helped pass the 16th Section Reform Act of 1978, which allowed schools to lease public lands and profit from the revenue. The Jackson Public School District, the second largest in the state, gained the rights to the 600-acre Lake Hico, which is currently open to a number of redevelopment opportunities that will generate additional revenue for the nearly 26,000 students served by Jackson's 62 city schools.

Margaret Walker Alexander: Jackson State University, where Margaret Walker Alexander taught as a professor of English for more than 30 years, has a unique claim to fame: the school houses one of the world's largest collections of a modern Black female writer, made possible by Walker Alexander's donation of her personal papers to the Institute for the Study of the History, Life, and Culture of Black People. While serving as a faculty member at the university, Walker Alexander organized a number of conferences to celebrate the life and work of Black authors, which still continue.

Myrlie Evers: In May 1963, a Molotov cocktail exploded beneath the carport of Myrlie and Medgar Evers. Nearly 60 years later, in December 2020, the home was placed on the National Registry of Historic Places, and the former chairwoman of the NAACP continues her work in the city where she and her husband were targeted for their work in civil rights by leading the Medgar and Myrlie Evers Institute. Evers also partners with local entities to continue to elevate the life and work of her late husband, hosting a lecture series in conjunction with the Mississippi Civil Rights Museum and co-sponsoring a summer programs for young people with the William Winter Institute for Racial Reconciliation.

Cora Norman: When Cora Norman was asked to be the first-time executive director of the Mississippi Humanities Council, she hung up the phone and went to look up the meaning of the word "humanities." Norman would then spend the next three decades shaping that definition, as she organized a series of forums across the state, inviting both Black and white professors from universities across the state to share their academic work with interested citizens. Norman's work in the area continues with the MHC's Prison to College Pipeline, where women at the Central Mississippi Correctional Facility in Pearl have the opportunity to earn college credits.

Fannye Cook: Francis "Fannye" Cook joined the Game and Fish Commission as a lowly research assistant in 1932, despite the fact that she had been instrumental in its formation. Although her male colleagues were reluctant to accept female leadership, Cook worked her way up to project manager for the Depression-era Works Progress Administration, supervising scientists who amassed samples of the state's flora and fauna. The thousands of specimens the project collected eventually became the bedrock of the Mississippi Museum of Natural Science where Fannye was finally permitted to take the helm. She served as the museum's director until 1958.

Helen Barnes: Helen Barnes lived outside of Mississippi just once—forced to leave her home state to pursue a college education—as no medical program in the state would accept a Black female student. Once earning those coveted and once-denied letters behind her name—"M.D."—Barnes returned to the Magnolia State to practice medicine, becoming the first Black woman to be an OBGYN in Mississippi. Originally working in Mound Bayou, Barnes eventually joined the staff at UMMC to care for underprivileged mothers and infants at the capital city's public hospital.