Misery Lingers for Many Without Water in Mississippi Capital 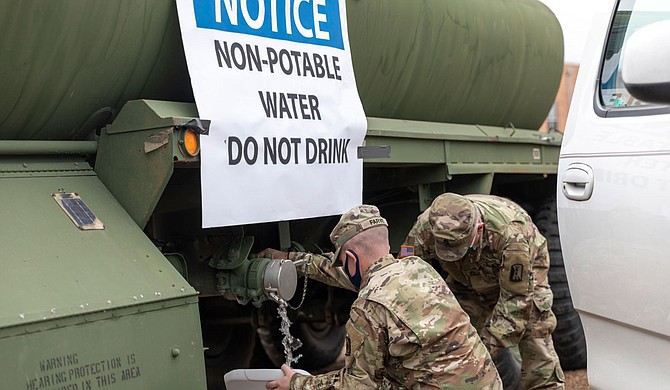 Water for flushing toilets was being distributed at seven sites in Mississippi’s capital city—more than 10 days after winter storms wreaked havoc on the city’s water system.

The sites were open in Jackson on Sunday because the system is still struggling to maintain consistent water pressure, authorities said.

The system has not been able to provide a sustainable flow of water throughout the city, city officials said.

“Our system has basically crashed like a computer and now we're trying to rebuilt it," Jackson Public Works Director Charles Williams said at a Sunday briefing.

One of many solutions has been to open fire hydrants in the city, which allows more water to flow to south Jackson and other parts of the city with the lowest pressure, he said. Crews are also trying to get water storage tanks filled.

No specific timeline was given for when the problems would be fixed. The city does not have exact numbers of people still without water, Mayor Chokwe Antar Lumumba said at Sunday's briefing.

Help is needed now in Jackson, but long-term support from the federal government will also be needed to upgrade the system, the mayor said. Needs with the city's infrastructure have gone unaddressed for decades, he said.

“We more than likely have more than a $2 billion issue with our infrastructure," he said.

“A lot of people didn’t work for over a week because of water and power issues," he wrote. “On top of that energy and gas bills are going to be higher because of the extreme cold weather last week."

“Most working families don’t have savings, so people are in survival mode right now," Crudup added.

Most of the city of about 161,000 had no running water after the storms struck, and residents were advised to boil any water that actually came out of their taps.

The mayor said that the city’s water mains are more than 100 years old and not built to handle the freezing weather that hit the city.