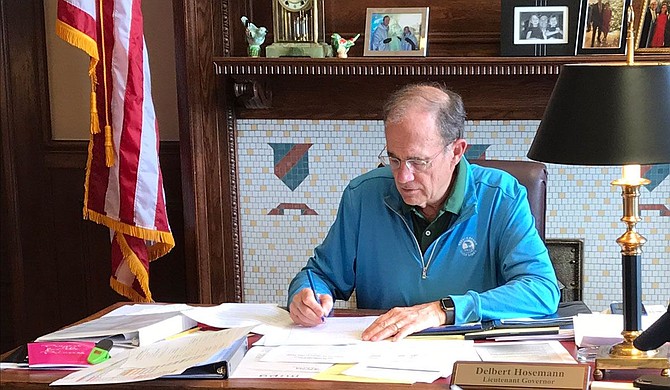 Many lawmakers, including Lt. Gov. Delbert Hosemann, have expressed support for the Legislature returning to the Capitol outside of the normal session to pass medical marijuana legislation and honor the will of the voters. Photo courtesy Delbert Hosemann

JACKSON, Miss. (AP) — Two prominent Mississippi physicians urged lawmakers Monday to put “guardrails” in place if medical marijuana is legalized in the state, warning that officials should be careful about making a product available that has not been thoroughly tested by the FDA—especially when it comes to children.

Meanwhile, a patient advocate told the stories of three Mississippi children who experience seizures and want to be able to access medical marijuana as a treatment. The advocate said they have tried FDA-approved pharmaceutical drugs, and none have helped.

Many lawmakers, including Lt. Gov. Delbert Hosemann, have expressed support for the Legislature returning to the Capitol outside of the normal session to pass medical marijuana legislation and honor the will of the voters.

To do so, they need the approval of the governor. Mississippi Republican Gov. Tate Reeves said he will support a special session, but he does not want it to go on for too long, costing more taxpayer money. The governor said lawmakers need to come to a consensus on how to implement the program before returning to the Capitol.

Amy Smoot, a patient advocate from DeSoto County, told the stories of three families who want to access medical marijuana to ease their children’s suffering. She said one 9-year-old girl’s family finally went to Colorado in 2017, when no prescription drugs were working. After starting on THC oil, she has not had a seizure in three years.

“I’m asking that you give these children a chance,” she told lawmakers.

Medical marijuana advocates were outraged after Initiative 65, a state constitutional amendment approved by voters last November, was thrown out. It would have required the Health Department to create a program so marijuana could be available to people with “debilitating” medical conditions. The long list included cancer, epilepsy and sickle cell anemia.

However, Dr. Jennifer Bryan, chair of the Mississippi State Medical Association Board of Trustees, said the idea of a medical marijuana program coming to Mississippi has always concerned her. She said she does not see the marijuana plant as medication, but rather a substance to be studied. Calling marijuana medication is “an attempt to make it more benign than it really is,” she said.

Bryan said without enough restrictions in place, she fears people will abuse the medical marijuana program in order to use the drug recreationally.

“We’re trying to keep guardrails on the program, but it’s a slippery slope,” she said.

Dr. Scott Hambleton, medical director of the Mississippi Physicians Health Program, shared her concerns, saying he also wished more research had been done on the product.

Bryan said if a program is implemented, the legislature will need to make strict rules about how the product is packaged and marketed, avoiding anything that could attract children.

Mark Cash, owner of the CBD dispensary The Green Guys in Starkville, said there’s a lot of misconceptions about medical marijuana. When he started selling CBD products, he had a stereotype of what his customers would be like.

“As time progressed, that has drastically changed,” he said. Cash said he sees clients from a wide array of socio-economic backgrounds who are looking for any means to treat their pain. People who want medical marijuana are no different, he said.

Karmen Hanson of the National Conference of State Legislatures, said 36 states, three territories and Washington D.C. have medical marijuana programs, and each place approaches the subject differently. The programs are also constantly evolving over time, she said.

“This is is not a ‘one and done’ situation,” she said. “You might enact something one year, and the next year you’re going to have dozens of bills to make tweaks.”