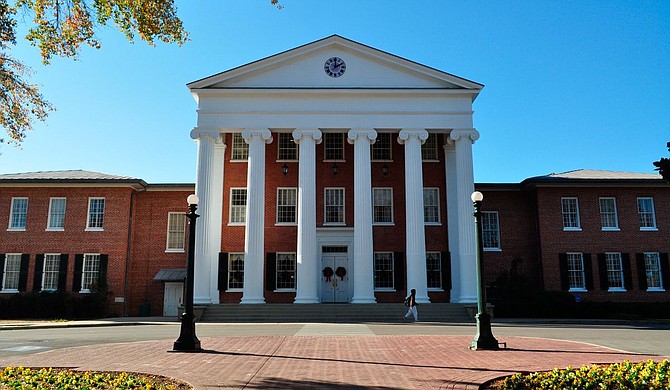 The University of Mississippi has reached a settlement with an assistant professor who was terminated after publicly criticizing the school as racist while speaking out for criminal justice reform. File Photo by Trip Burns

JACKSON, Miss. (AP) — The University of Mississippi has reached a settlement with an assistant professor who was terminated after publicly criticizing the school as racist while speaking out for criminal justice reform.

Details of the settlement remained confidential, including how much money the university agreed to paid to Garrett Felber. University officials have never said the tenure-track assistant history professor was fired because of any public statements he had made.

In a December 2020 termination letter from History Department Chair Noell Howell Wilson, Wilson told Felber they had experienced a breakdown in communication after she rejected a grant he was awarded to support a project focusing on mass incarceration and immigrant detention. She said he had refused to meet with her by phone or online, only in writing.

Felber has asserted that his termination was a result of his outspoken criticism of the university.

“We believe that Dr. Felber’s termination violated the First Amendment,” attorney Rob McDuff of the Mississippi Center for Justice said in a statement Thursday. “This all went down after his very pointed criticisms of the University. The reasons given for the University’s decision don’t hold up and Dr. Felber had an excellent record as a teacher and a faculty member, including stellar reviews from his Department Chair."

Wilson informed Felber that his contract with the university would end in December 2021. He was on leave at the time from the University of Mississippi at a one-year fellowship at the W.E.B. Du Bois Research Institute at Harvard University’s Hutchins Center for African and African American Research.

In October of that year, Felber tweeted that Wilson had rejected a $42,000 grant he had been awarded to support Study and Struggle, a political education project on mass incarceration and immigrant detention. At the same time, the university had recently publicized a grant from FWD.us, an organization centered on American immigration and prison systems reform.

Felber said Wilson told him the Study and Struggle project would be a “political” not “historical” project, and that it could jeopardize department funding.

“The real issue is that (the University of Mississippi) prioritizes racist donors over all else,” he tweeted. “So it’s not some mythic politics v. history binary, but that this antiracist program threatens racist donor money. And racism is the brand. It’s in the name.”

McDuff said Felber decided to settle rather than spend time and resources litigating the matter in court, saying he'd rather spend his energy focusing on his work.

The Associated Press reached out to a university spokesperson for comment and didn't hear back.

Felber was represented during the negotiations by McDuff and Attorney Naomi R. Shatz of the Boston law firm of Zalkind Duncan & Bernstein LLP, which specializes in defending the rights of students and teachers.

Shatz said the firm is increasingly concerned about universities ignoring and violating their faculty members’ rights to free speech and academic freedom.

“Professors like Dr. Felber have a constitutional right to speak out about injustices they see in their institutions,” Shatz said.

Felber has accepted a faculty fellowship at Yale University in American Studies at the Center for the Study of Race, Indigeneity, and Transnational Migration.

In a statement Thursday, he said the University of Mississippi is a political institution.

“When the University of Mississippi was constructed with enslaved labor to reproduce the wealth and power of a handful of white men, it was political. When it refused to accept Black students, it was political,” he said. “When it arrested and expelled the Black students it did admit, it was political. And as it continues to support and benefit from policing, prisons, and other life-destroying institutions dedicating to upholding white supremacy, extracting capital, and devastating the planet, it is no doubt political.”