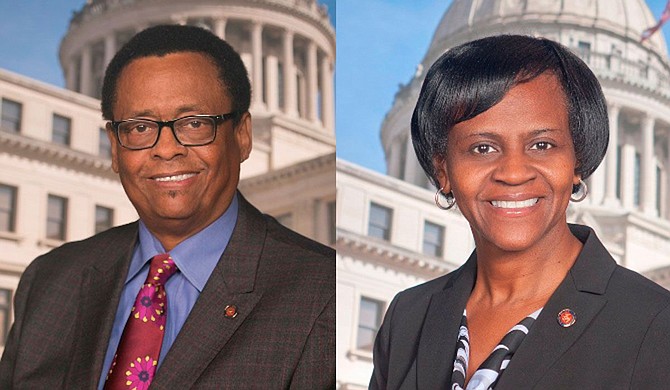 Democratic Sens. Sampson Jackson of Preston (left) and Tammy Witherspoon (right) of Magnolia stepped down June 30, the last day of the state budget year. Witherspoon was inaugurated the next day as mayor of her hometown. Photo courtesy State of Mississippi

Democratic Sens. Sampson Jackson of Preston and Tammy Witherspoon of Magnolia stepped down June 30, the last day of the state budget year. Witherspoon was inaugurated the next day as mayor of her hometown.

Republican Reeves will decide on special election dates later this month, spokeswoman Bailey Martin told The Associated Press on Tuesday. Legislators are not at the Capitol now, and their regular session begins in January.

Candidates in special elections in Mississippi run without party labels, and these elections will not change the balance of power. Republicans hold a majority in the 52-member Senate.

Republican Lt. Gov. Delbert Hosemann said in a statement Tuesday that Jackson and Witherspoon were both known for working across party lines.

“After nearly three decades of service, Sen. Jackson has a wealth of experience and knowledge about the legislative process and policy which served his district very well," Hosemann said. “Sen. Witherspoon was equally as dedicated to finding solutions and opportunities for her constituents.”

Jackson had been in the Senate since 1992 and was chairman of the Forestry Committee this term. He represented District 32, which includes Kemper, Lauderdale, Noxubee and Winston counties.

Witherspoon had been in the Senate since 2016. This term, she was chairwoman of the Enrolled Bills Committee and vice chairwoman of the Housing Committee. She represented District 38, which includes Adams, Amite, Pike, Walthall and Wilkinson counties.