EDITORIAL: Elected Leaders of the Mississippi 'Sedition Caucus' Must Recant or Resign 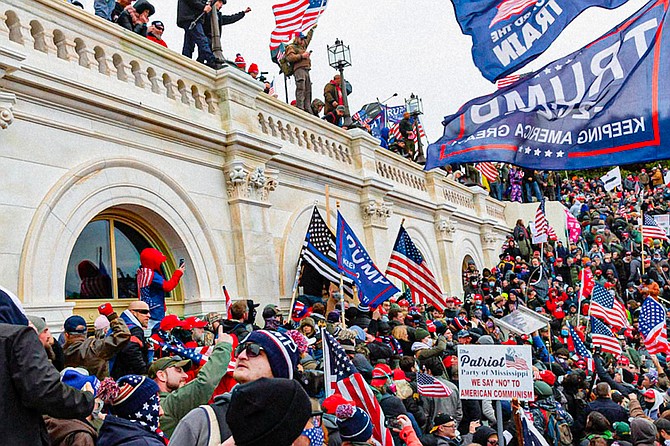 Mississipians were among those who stormed the U.S. Capitol on Wednesday, Jan. 6, 2020. Photo by Blink Fanaye

Mississippi and the nation must hold U.S. Sen. Cindy Hyde-Smith and Reps. Trent Kelly, Steven Palazzo and Michael Guest accountable for their complicity in the lies that Donald Trump has used to foment fear, doubt and, ultimately, insurrection.

If they can’t bring themselves to tell the truth about the election and apologize to the American people, they should resign. As it stands, their efforts to thwart democracy make them unfit to serve.

Hyde-Smith, Kelly, Palazzo and Guest joined six other Republican senators and 136 Republican representatives as elected officials who put their loyalty to one extremely flawed and mercilessly dishonest man—Donald Trump—ahead of their loyalty to the United States of America and our democracy.

Just as the domestic terrorists who rioted in the Capitol will come to regret the hubris that caused them to announce their lawlessness in videos and selfies on social media, so too will these "Sedition Caucus" members, as many Americans are calling them, come to understand that being a sycophant for an anti-democratic liar is not a source of pride, but shame.

We hope that the damage to our democracy ends at the Capitol invasion that took place on Jan. 6, 2021. But there’s a very real chance that it won’t, particularly as so many Republicans in Mississippi and elsewhere are intent on continuing to lie to their constituents about the 2020 election, while insisting that others “move on” from the egregious assault in the Capitol in D.C. in the name of “unity.”

So far, they’ve engaged in the opposite of unity by putting votes on the record that prop up the same lies that fired up domestic terrorists to go to Washington, D.C., invade the U.S. Capitol, try to hunt down national leaders and their staff members, steal and destroy property and cause numerous deaths, including a Capitol Police officer.

Leadership is about leading people in an honest direction—even when the truth is painful, such as during an election loss—not down a dishonest path that can get your followers to kill and be killed and imprisoned, leaving families destroyed while creating a dangerous mythology that can, in turn, cause more violence and continue to divide our nation.

It’s Time to Acknowledge the Lies, Save Lives

These elected Mississippi public servants must now be honest with their constituents that their guy lost. Big. He lost by the largest popular percentage against an incumbent since 1932. And he lost the Electoral College by more than the “landslide” that he called his win in 2016.

Why? Because a ton of Americans want Trump out of the White House and his hands off the nuclear codes. They want a POTUS who doesn’t foment hate and division on Twitter. Many Americans feel his lack of leadership has damaged our health, our economy, our democracy and the reputation of our precious and amazing republic.

To admit the truth of Trump’s electoral loss is American. To foment fear, dissent and ignorance based on Trump's lies is un-American. That’s where the Sedition Caucus finds itself today.

Trump organized a rally at the White House, told supporters how wronged he and they were, commanded them to march on the Capitol, lied to them that he would be there with them and exhorted them to “stop the steal.” (His personal attorney told them to wage a "trial by combat.")

Then Trump went back inside the White House to watch his work on TV.

The Sedition Caucus? They back him with their words and their votes. They still won’t tell the truth. They voted for the lies just hours after Trump’s supporters had stolen laptops, broken windows, terrorized police and staffers, and smeared excrement on the walls of the building they sat in.

The violence last week—and any further violence, God forbid—is on the Sedition Caucus. They have the power right now to calm their constituents down. They are not elected to lie at any cost and foment violence and division; they represent all the people in their districts.

They must start telling the truth.

Let's start with the facts. After the Capitol incursion, when lawmakers bravely returned to the smashed and ransacked seat of U.S. government, the majority of Mississippi's GOP delegation still voted to overturn the Electoral College votes in Arizona and Pennsylvania.

These elected officials did this knowing the following:

Since the objections and votes of the Sedition Caucus don't otherwise make sense, we conclude that they voted to unconstitutionally overturn the Electoral College count in Arizona and Pennsylvania in order to aid and comfort Donald Trump as he continues to lie about this election.

Trump retains power and sway over certain of these elected officials' constituents. Through their complicity with his lies, they’re helping him.

Trump’s lies are the words he has used to foment rebellion among his supporters and, ultimately, led to terrorists storming the Capitol, chanting "hang Mike Pence”; stating their desire to kill Speaker Nancy Pelosi; killing, beating and seriously injuring police officers; terrorizing staff and elected officials; stealing government property; and gleefully desecrating one of the institutions of American democracy like it was an out-of-control white supremacists house party.

'The Very Definition of Treason'

Storming the Capitol to overturn a legitimate election is the very definition of treason. For his sedition, Trump deserves impeachment and, ideally, to face charges once out of office.

Propping up the man using those lies to try to cling—violently—to power, despite his clear loss in a democractic election, is aiding and abetting. And it’s shameful.

It’s unconscionable to now continue the deadly charade, emboldening other such violence. No one should remain in office who will not acknowledge the lies that caused the Jan. 6 insurrection.

Hyde-Smith, Kelly, Palazzo and Guest—your oath is to the Constitution, not to a flawed and failed president who lost his election by an insurmountable margin.

Step up and admit that the election was not stolen. Tell us why you supported Trump's lies and ask forgiveness for breaking your oath of office. Lead.

Or step down. Resign your office for the good of the state and nation.

It's time for the lies to end. That's the only glimmer of hope we have for unity.