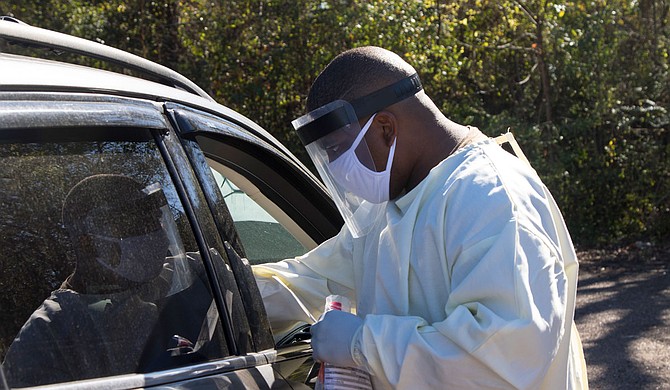 As many Black residents in Mississippi remain doubtful about the benefits of taking a COVID-19 vaccine when available, more Black doctors are pushing for them to reconsider by getting immunized themselves. Army National Guard Photo by Spc. Christopher Shannon II

JACKSON, Miss. (AP) — As many Black residents in Mississippi remain doubtful about the benefits of taking a COVID-19 vaccine when available, more Black doctors are pushing for them to reconsider by getting immunized themselves.

A group of five Black doctors received their first injection of Moderna’s COVID-19 vaccine during an event in Jackson Tuesday. Dr. Andrea Phillips, a group member and a Jackson physician for more than 30 years, said proving to the community that the vaccine is safe and important as it reaches more of the general population.

“We’re trying to encourage, inspire and create some trust in the vaccine among our patients,” she said. “We’re coming together to show that we trust this process and we think this is the best way for us to get out of this pandemic.”

According to a new Millsaps College/Chism Strategies survey, Black residents are among the most likely to get the vaccine when it becomes available. But Phillips said only 40% of her Black patients said they’re considering whether to take it.

Data from the Mississippi State Department of Health shows that as of Tuesday, 4,644 Black residents have received their first of two vaccinations, just 18% of the total number of people to receive it in the state. But Mississippi has more than 1.1 million Black residents that account for 37.8% of its population, according to 2019 estimates from the U.S. Census Bureau.

The need to provide more proof of safety for the Black community comes from its troubled history with the health care system, Phillips said. Many residents are wary because of general mistreatment and inferior care several members of the community have received, she said.

“This is a societal issue and people of color, particularly African-Americans, have been treated horribly and the status or level of income doesn’t make a lot of difference,” Phillips said.

A recent example is the case of Dr. Susan Moore, a Black doctor from Indiana who died after being admitted to the hospital due to COVID-19 in December.

Moore accused doctors at the Indiana University North Health Hospital in Carmel, Ind., of not providing helpful treatment in a widely-circulated Facebook video. She was discharged by that hospital on Dec. 7, only to be readmitted to a different Carmel hospital hours later when she failed to respond to after-care calls. She died on Dec. 20 while still hospitalized.

Studies such as “The Tuskegee Study of Untreated Syphilis in the Negro Male” — commonly known as the Tuskegee Experiment — have also bred distrust in the community.

Conducted by the United States Public Health Service and the Centers for Disease Control and Prevention, in conjunction with Tuskegee University, the study followed 600 Black Alabama sharecroppers beginning in 1932 to observe the natural progression of untreated syphilis. But the 399 men who were infected with the virus were never told of their diagnosis. Despite being promised free health care from the federal government as an incentive for participating in the study, the men were instead given placebos and diagnostic procedures disguised as treatments.

The study, which was originally supposed to stop after six months, ended 40 years later when it was exposed to the press. In total, 128 of the participants died directly from syphilis or complications from the virus, despite effective treatment being publicly available as early as 1947. One medical journal cited it as “the most infamous biomedical research study in U.S. history.”

President Bill Clinton formally apologized to the families of the victims on behalf of the U.S. government in 1997, calling the study shameful and racist.

Phillips, the Jackson physician, said she hopes that patients who are seeing the doctors they have come to trust will make a change and help them reconsider their decision on taking the vaccine.

“The trust ... is why we’ll be successful in getting people to look at this vaccine in a different way.”