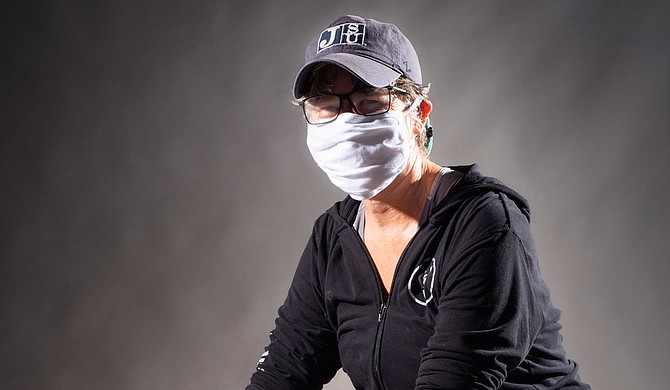 Now that 2020, at long last, has drawn to a close, leaving a trail of tired, frustrated people in its wake, the world is in need of a little joy. Jackson artist Ellen Langford endeavors to exude joy through her work. Her vividly colored paintings depict scenes of connection, often between people and animals, that may be quiet or exuberant, but are always full of life and hope. The exuberant spirit that radiates from her work is born, in ways not necessarily readily apparent to the viewer, from Langford’s connection to the state of Mississippi and its people.

When Langford returned to Jackson in 1998, after having been gone since leaving for college over a decade earlier, her stay was supposed to be brief. Her plan was to stay for one year while she trained for a career as a paramedic; but 22 years later, she’s still here, and she’s happy about it.

Langford’s work as a paramedic lasted for a decade, until she realized that the popularity of her paintings had grown to the point that she was able to support herself as a full-time artist. Her time as a paramedic, however, still informs her artwork in a profound way.

“(I worked) as a paramedic for about 10 years—some in the Jackson area, and the Delta for a couple of years, and about a year or so down in Port Gibson,” Langford says. “That helped me get to know Mississippi in a way that I really hadn’t before, as a pretty privileged white kid growing up in Jackson in the ‘80s, and that’s a huge gift. And I think that’s where this kind of narrative look of my work comes from, largely.”

Langford uses the word “narrative” to describe her work, explaining that each painting is a one-image story unto itself. She says that, when she was younger, she didn’t like that people sometimes compared her work to children’s book illustrations, but that, as she’s matured, she’s come to understand and embrace why people make that connection.

“In coming back to Mississippi and seeing the world in a much more humble and realistic way, I love the kind of childlike joy that people find in my work often … I feel like there is enough pain in the world—and I certainly painted with lots of angst and pain in my twenties,” Langford says. “I feel like, at this point in my life, that we’re all going to go through the hard stuff anyway and, you know, kind of creating moments that could be meditative or hopeful, could be my gift to the world.”

Ellen Langford’s artwork can be viewed at The Attic Gallery in Vicksburg, Haven in Jackson, Oxford Treehouse Gallery in Oxford, Caron Gallery in Tupelo, and American Folk Art in Asheville, N.C., as well as on her website at ellenlangford.com. She also posts photos of her work on Facebook at her page titled Paintings by Ellen Langford, and on Instagram @ellenlangfordart.