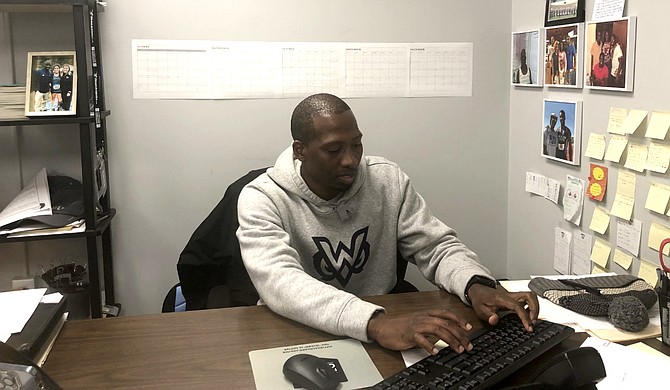 Dedrick Burnett, head coach of the Mississippi University of Women men's and women's cross country, indoor track and field, and outdoor track and field teams, assists the athletic department in a variety of other ways as well. Photo by Tom Rysinski / The Commercial Dispatch

Need someone to take an issue raised by a soccer player to the athletic director? Tell Dedrick Burnett.

No, Burnett is not the administrative assistant to Mississippi University for Women Athletic Director Jennifer Claybrook. But in an athletic department in which almost everybody wears many hats, Burnett’s hat rack is among the most crowded.

“I was brought in as assistant cross country and track coach,” said Burnett, who arrived in Columbus from Jackson State in 2019. But the track coach left to take an AD job, the cross country coach’s husband got into law school and moved, and Burnett took on both head coaching jobs.

So, naturally, he’s in charge of getting Owls teams to away games.

“He coordinates the buses, the itineraries for the coaches, he communicates … that’s a lot of trips,” Claybrook said. “He just volunteered to do that.”

“Jennifer was new to the department, and she already had a lot on her plate coming in and taking over a department that was left from the previous administration with a lot of paperwork to do, especially with getting into the NCAA,” Burnett said. “So I took it upon myself to see what I could do to help. I thought travel wouldn’t be that bad.

“I ask the coaches for an itinerary, I go through the itinerary to make sure everything is fine and then send it to the bus company. I have a separate calendar just for travel dates for the teams.”

Burnett knows more than just travel plans for The W’s student-athletes, he learns a great deal more through his position as adviser to the Student-Athlete Advisory Committee, made up of two athletes from each team at The W.

“We meet once a month and discuss what’s going on in your sports, if you need to bring up any topics or concerns,” Burnett said. “We discuss it, then I take it back to Jennifer.”

Burnett’s own running days aren’t that far behind him; he ran track at Jackson State from 2006 to 2010. He said he started as a distance runner, then he was a hurdler.

“Every year I would try something different,” he said. “I like to classify myself as a decathlete.”

“I always wanted to coach,” he said, and if that meant hanging around the program until something opened up, that’s what he did.

Burnett started as an assistant equipment manager and volunteer coach, then became the head equipment manager. Now, he operates athletic teams at The W which combined include roughly 100 student-athletes, a number that will increase, he said.

“We’re small right now,” said Burnett, speaking of the entire athletic department. “There have been a lot of coaching changes since I came here, administration, too. I think when we get to the point where we’re stable as a staff, we’re going to flourish. This is a great place to be.”

His biggest problem is getting the word out about the university and its sports program.

“A lot of people are just finding out we have a track team, so that’s the struggle,” he acknowledged. “We get overlooked.”

Behind Burnett’s desk in the athletic department is a unique piece of art featuring Scooby-Doo on a track.

“I found this artist online — somebody suggested her to me — and I was like: “This is the concept. I like Scooby-Doo, I do the hurdles, I went to Jackson State. What can you do with it?”

So, the mystery-solving Great Dane hangs behind him every day, on a track with “Jackson State” emblazoned on the hurdles. It’s guaranteed to generate a smile, although Burnett is very serious about his work.