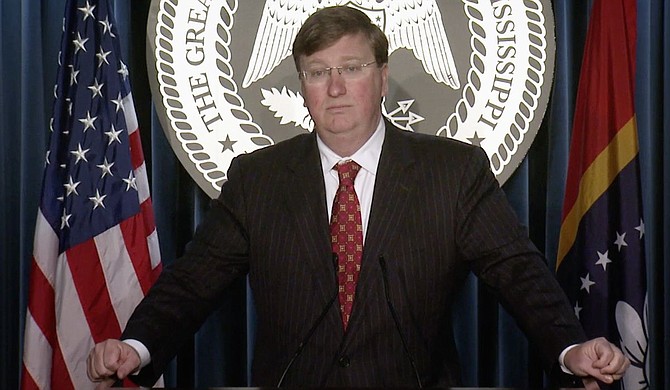 Mississippi Gov. Tate Reeves said Monday that he is approving $1,000 in hazard pay bonuses for state law enforcement officers, and they will receive the money by the end of this month. Photo courtesy State of Mississippi

JACKSON, Miss. (AP) — Mississippi Gov. Tate Reeves said Monday that he is approving $1,000 in hazard pay bonuses for state law enforcement officers, and they will receive the money by the end of this month.

The money is coming from coronavirus pandemic relief funding that Mississippi received from the federal government.

The Republican governor said officers have continued working through the pandemic while facing “downright crazy” rhetoric.

“They had to bring the same level of professionalism day in and day out, despite a litany of dangerous rhetoric by politicians and talking heads about those who serve in this profession — broad, sweeping characterizations about who they are and what they stand for, simply based on their line of work,” Reeves said during a news conference. “Some have called policing inherently and intentionally racist. There were calls to defund the police, to dismantle them.”

Reeves said the bonuses will go to about 1,750 sworn law enforcement officers employed by state agencies as of Nov. 30.

The list includes state troopers, narcotics agents and investigators who work for the Department of Public Safety.

“This one-time payment, at Christmas time, will be a small recognition of the service of those who put their safety on the line every single day,” Reeves said.

The bonuses are not going to local police officers or employees of sheriff departments.

Legislators did not have to approve the bonuses because the money is from a fund that the governor controls. Reeves said the price tag is about $2.4 million, with the state covering the cost of fringe benefits to ensure that each officer receives the full $1,000 without deductions.

“Something that really stood out to me over the last two years was our officers' attitudes,” Reeves said. “They never complained. They didn't feel sorry for themselves. They didn't give up under the intense pressure. Rather, they stepped up and they stood strong.”