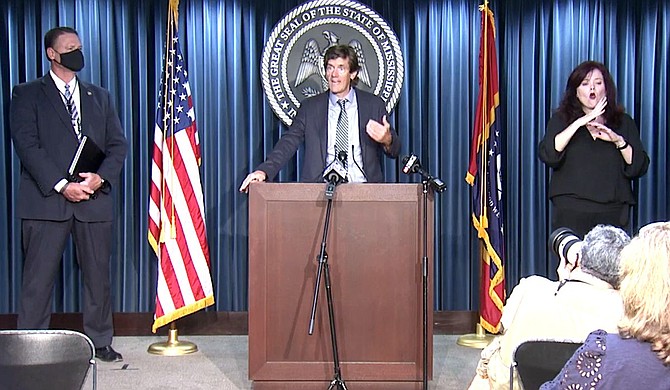 Mississippi's top health official said Tuesday that he has received threats from people who are spreading lies about his family as he urges the public to get vaccinated against COVID-19. Photo courtesy State of Mississippi

JACKSON, Miss. (AP) — Mississippi's top health official said Tuesday that he has received threats from people who are spreading lies about his family as he urges the public to get vaccinated against COVID-19.

The state has seen a rapid increase in cases since early July, driven by the highly contagious delta variant of the virus and the state’s low vaccination rate. The health officer, Dr. Thomas Dobbs, has been imploring people for months to get vaccinated.

“I have received some threatening phone calls and want to clarify any confusion there may be with some conspiracy theories going around,” Dobbs wrote on Twitter.

Dobbs said one lie is that his son, who is also a physician, receives a World Bank-funded kickback when Dobbs urges people to get vaccinated.

“I get zero $ from promoting vaccination," Dobbs wrote.

More than 1,000 out-of-state medical workers were starting to deploy to 50 Mississippi hospitals Tuesday to help with staffing shortages amid the COVID-19 surge. Republican Gov. Tate Reeves said 808 nurses, three certified nurse anesthetists, 22 nurse practitioners, 193 respiratory therapists and 20 paramedics were hired under 60-day contracts that could be extended, if needed.

The Mississippi Emergency Management Agency awarded contracts to four companies of the 19 that submitted proposals when the state sought medical workers earlier this month. Reeves said the contract employees are being deployed within nine business days from when the state Health Department asked MEMA to seek the help.

“That, in my view, is an impressive feat,” Reeves said during a news conference Tuesday.

Mississippi will pay $80 million for the contracts, and Reeves said he expects the federal government to reimburse the state for the entire expense.

The Army and the Air Force are also each deploying medical contingents to work in Mississippi, with 43 people from each branch.

The Health Department on Tuesday reported 3,291 new cases of COVID-19 and 111 new deaths from the virus, bringing the state's coronavirus death total since the start of the pandemic to at least 8,158. Mississippi has a population of nearly 3 million and has reported nearly 417,000 COVID-19 cases since the spring of 2020.

The state epidemiologist, Dr. Paul Byers, said Tuesday that vaccinations have increased in Mississippi over the past several weeks after hitting a low in early July. The Health Department reported 85,510 people received a first, second or third inoculation during the week that ended Saturday. That's the largest number in any week since mid-April.

However, Mississippi still lags behind the national rate: 38% of eligible people in the state are fully vaccinated against COVID- 19, compared to 52% in the U.S.

The Scarlet Pearl casino on the Mississippi Gulf Coast is requiring all of its more than 800 employees to be vaccinated against COVID-19 unless they have a medical condition that precludes vaccination, according to Ben Koff, the casino's senior vice president of marketing. Koff said employees face a Friday deadline to receive at least the first vaccination, and more than 90% had done so Tuesday.

He said Scarlet Pearl started its vaccine mandate with its 180 salaried employees, and one person left after declining to get vaccinated. Koff described the mandate as a way of caring for the community.

“We're not going to compromise on caring,” Koff said.

Koff said Scarlet Pearl has been offering on-site vaccinations to employees and their families. Employees are receiving $300 to become fully vaccinated. He said the casino will next month give $500 prizes to 300 customers who are members of the in-house rewards club and can prove they are fully vaccinated.