‘An Explosive Recipe’: Delta Surge Shows No Sign Of Stopping 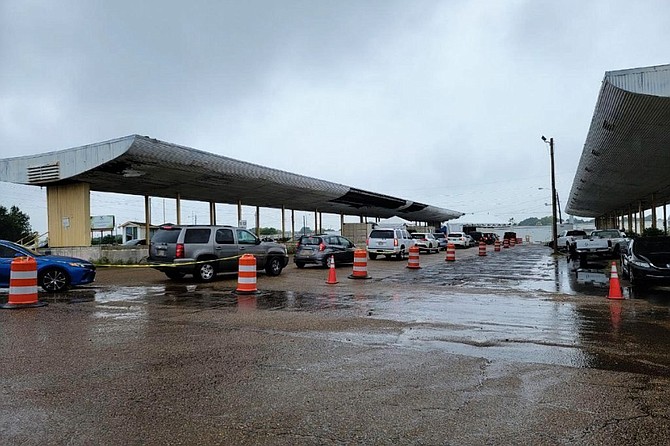 A Jackson testing site shows a flood of Mississippians potentially infected with COVID-19. State Health Officer Thomas Dobbs explains why the delta variant is such a danger to public health—and a successful school year. Photo by Nick Judin

From the stalls of the Mississippi Farmer’s Market in Jackson, the row of cars coming in for COVID-19 testing seems endless. Their motion through one of the Mississippi State Department of Health’s largest testing sites is halting, but constant. As each car leaves, a steady stream of replacements refills the line, with the morning thunderstorm doing little to dissuade the onslaught of the sick.

On the sidelines, a worker at a mostly empty market stand, who asks not to be identified, tells the Mississippi Free Press that the wave shows no signs of breaking. “This ain’t going nowhere,” she says, masked and protected by a tall plastic shield. “You can see it out to the street.”

Hundreds come, symptomatic or exposed to the infected, providing the patrons and workers of the Farmer’s Market what may be the earliest signs of a future outbreak. The flood of visitors beneath the dreary sky will be tomorrow’s headline, translated to anonymous numbers, some converted to the mass of hospitalizations or transmitted to intensive care units for intubation. Fewer still will pass into that final column, joining Mississippi’s 7,556 confirmed dead.

The line breaks and reforms, and more cars fill in the gaps. The woman in the stall adjusts her mask and admits to a certain fear, watching the numbers swell right beside her. Some of them, she says, swing through to buy tomatoes after their tests.

Dobbs, On the Record

It is mere coincidence that this column of potentially infected today lies only a stone’s throw away from the headquarters of the MSDH. There, State Health Officer Thomas Dobbs joined the Mississippi Free Press today for an extended conversation on the pandemic and the delta surge only hours after MSDH announced 4,991 cases of the virus for the last three days.

Dobbs’ message is, as it so often has been, remarkably simple. Delta is different, categorically more virulent than any strain of COVID-19 that Mississippi has faced thus far.

“A person who has (delta) can on average spread it to eight or nine additional people. Run that through several different cycles: one goes to eight, goes to 64, ad infinitum,” Dobbs explained on MFP Live today.

Mississippi and a handful of other southern states have been thrust into unwanted spotlight for the second time in the pandemic, with their rock-bottom vaccination rates driving unprecedented spread of the virus. Mississippi has now exceeded the brutal case numbers of 2020’s summer surge, in spite of having access to a vaccine that reduces transmission by roughly 95%.

It is the terrifying rapidity of the spread that has so alarmed public-health officials, swamped with the influx of cases. “We see without a doubt that with the delta variant people go from exposed to contagious within about two days, compared to four days with other (strains),” Dobbs said today. “So you don’t really have as much time to intervene. It gets away from you more quickly.”

In addition, the incredibly virulent delta strain of coronavirus is already proving to be an unmatched threat to yet another school year. With August just beginning, multiple schools across Mississippi already have had full shutdowns from rampant COVID-19 outbreaks within a week of reopening.

“Right now what we’re having is a combination of a variant that’s three times more contagious than what we were dealing with last year and a public that’s increasingly reticent to take on preventive measures,” Dobbs said.

In Lamar County alone, more than 800 students and staff are quarantined after a week of classes. The closures followed rapidly: Oak Grove and Purvis high schools rapidly transitioned to online-only to stave off a rolling infection. Oak Grove Middle School followed this week.

“It’s really an explosive recipe for disease transmission. I think it’s going to be very challenging,” Dobbs warned today. “What happened in Lamar County schools is very demonstrative of what we’re going to see. It’s the nature of the biology of the delta variant. It’s just so very contagious unless we are absolutely fastidious.” 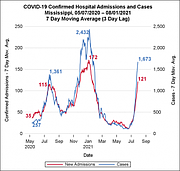 Dobbs also confirmed on MFP Live that MSDH would extend its call for masking in grade schools to the state’s colleges and universities, asking for compliance with CDC guidelines as young adults return to their campuses and dorms in the middle of a painful new wave of cases.

As valuable as masking is in preventing the spread of COVID-19, Dobbs stressed that ventilation may be even more critical.

“The viral levels in somebody with delta are a thousand times higher than what we’ve seen previously. The chance for airborne transmission is much higher,” Dobbs said. “There is definitely a potential for it being in a room for a period of time after someone leaves … so airflow and air clearance is so critically important.”

Hospitalizations continue a dizzying climb, the surest sign that something is fundamentally different with the delta surge. And this surge is coming in spite of the fact that many of the individuals most vulnerable to the virus have already been vaccinated.

“The fastest-growing number of hospitalizations are in people under 50,” Dobbs said. “We’ve got a lot of people in the ICU, 20s, 30s, 40s. It’s a very disturbing trend.”

Deaths may not reach the dizzying highs of January and February, when the oldest and most immunocompromised individuals in the state faced the full weight of the pandemic unvaccinated, but serious, hospital capacity-consuming complications are once again becoming an unavoidable consequence of the heightened transmission.

Dobbs added that so much of the virus’ long-term effect is beyond our current understanding. “What can happen to your reproductive system from a COVID infection?” he asked. “We’re seeing evidence of potential destructive changes in male testicles and reproductive health. For women, an increased risk of pre-eclampsia, (which) threatens the pregnancy and the health of the mom.”

But although the scientific understanding of the virus continues to offer far greater mysteries and dangers than the vaccine, misinformation continues to run rampant across the internet, from the mouths of bloggers and even some state legislators.

“A noxious social-media environment is poisoning our minds,” Dobbs said, then pointedly added that “some cable news is mind-poison as well.”