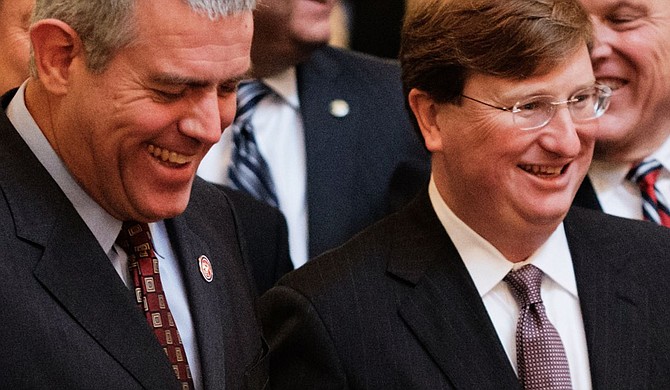 Mississippi House Speaker Philip Gunn, left, and Gov. Tate Reeves, right, told attendees at the Neshoba County Fair on July 29, 2021, that they both supported an effort to ban critical race theory in Mississippi's public schools. Reeves has admitted that he does not know of any public school that teaches critical race theory, a legal framework typically taught in law schools or advanced college sociology courses. Photo by Ashton Pittman

Mississippi House Speaker Philip Gunn promised attendees at the Neshoba County Fair yesterday that he will back legislation next year to ban “critical race theory” in Mississippi’s K-12 classrooms—despite the fact that it is not taught in K-12 classrooms.

“Ladies and gentleman, we can’t take a chance on critical race theory,” Gunn, a Republican, told the largely white, conservative crowd gathered at the Neshoba County Fair on Thursday. “We cannot allow it to be introduced into our schools. Socialists seek to turn Americans against each other and against this country by introducing critical race theory into our schools. We need to find ways to bring people together—not tear them apart.”

The Encyclopedia Britannica defines critical race theory as an “intellectual movement and loosely organized framework of legal analysis based on the premise that race is not a natural, biologically grounded feature of physically distinct subgroups of human beings but a socially constructed (culturally invented) category that is used to oppress and exploit people of colour.”

“I’m willing to do it, we don’t have to do it if no districts are currently offering (it), but if that becomes apparent, I am prepared to support any legislation that eliminates any ability for CRT to be taught in Mississippi’s classrooms, much like many, many, many states across the country,” Reeves told Gallo.

For months, Republican politicians across the country and right-wing media outlets have railed about the decades-old legal theory that had received little attention from politicians until this year. Some promoting fears about it in K-12 curriculums have begun using it as a catch-all for any classroom lessons about systemic racism or even about the history of slavery and segregation.

One teacher in Tennessee became the target of angry white parents after teaching about Ruby Bridges—the young Black girl who, in 1960, had to be escorted to her elementary school in New Orleans amid outrage from white parents who did not want a Black child attending school with their children.

Gunn’s decision to use his position as speaker to join the anti-CRT crusade comes amid rumors that he may run for governor against Reeves in the 2023 Republican primary. It also comes after a year in which he has often received positive media attention for overseeing the successful effort last year to retire Mississippi’s old Confederate-themed state flag and adopt a new one. The Mississippi Free Press spoke with several Black activists earlier this month who said that many in the media had given Gunn too much credit, while paying relatively little attention to Black activists and lawmakers who worked on the issue for decades.

One Black Lives Matter Mississippi activist, Taylor Turnage, told Mississippi Free Press reporter Nick Judin last month that, far from teaching critical race theory, she remembered white teachers in grade school teaching her about Confederates like Gen. Robert E. Lee. Teachers “would talk about them as if they were some sort of heroes,” she recalled.

Turnage offered criticisms of those who oppose critical race theory without speaking up against the teaching of “lost cause” myths, or who think children should not be taught about the history of Juneteenth, yet are OK with Gov. Reeves’ yearly Confederate Heritage Month proclamation.