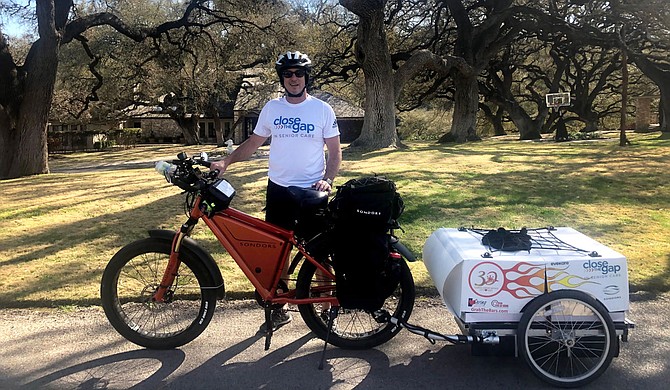 When Jeff Salter crossed the Mississippi River and made his way into Jackson, he celebrated an important milestone: 1,000 miles travelled on his e-bike. This number, however, only marks one-ninth of the total distance that Salter plans to travel on his cross-country tour as he pedals through the nation’s highways and byways to commemorate the 30th anniversary of his company’s founding.

“I worked at a home-care company back in 1991,” Salter says of the origins of Caring Senior Service. “An elderly person can need someone (to care for them) for 24 hours a day, and the company didn’t provide that service.” Only 20 at the time, Salter quickly decided that level of advanced care was something that he could coordinate, and he opened the first branch of Caring Senior Service later that year.

Since then, the business has expanded into a nation-wide service, and each branch can expect a visit from their CEO as he completes his 9,000 mile trek, which is intended to spark conversation about the continuing need for at-home senior care services. “This trip will show that there’s a lot of work still to be done,” Salter says. “We all need to work towards closing the gaps we see in our community, and each location inspires people to get involved, whether as a caregiver or in a technology career, and it all steers toward helping a senior remain at home and remain independent.”

Mississippi is no exception, as Salter plans to meet with officials involved in home care, hospice and rehabilitation services while visiting the capital city. Jackson will also mark the first stop that Salter and his entourage have made outside of Texas, as he started his journey from his home in San Antonio visiting coastal cities such as Corpus Christie and Houston before heading east. Salter notes that he plans to continue up the east coast before heading west again, eventually travelling down the Pacific coast en route to his starting point.

Such an expansive trip isn’t entirely unprecedented, as Salter states that “it’s normal for CEOs to visit their locations or to do driving or flying tours,” but his choice to bike from location to location certainly marks a departure from travel norms. “It gives you the opportunity to see things and the slower pace gives you a chance to reflect on what you have and where you’re going,” Salter reflects. It also gives him the opportunity to experience the hospitality of the nation, as he says that after hearing his story, business owners and concerned citizens will often offer to pay for his meals or provide other needed resources for his journey.

“I don’t need that,” Salter says of the offers. “I’m someone of means, so I have most of the creature comforts we all have, but they believe in what I’m doing and want to do their small part. It’s helped me see that you can get that much further, that much faster, that much easier. It doesn’t hurt to accept help; it’s not a sign of weakness.”

Accepting help has allowed Salter to empathize with the senior citizens his corporation aims to serve, saying that even his motorized bicycle has reinforced an important lesson: with a little assistance, we can do things we never thought were possible.

When he isn’t traversing the country, Salter enjoys spending time with his wife, Katrina, and his two sons. Prior to beginning a 2,000-mile training to prepare himself for his 30th anniversary tour, Salter was an avid rugby player, playing the sport nearly as long as he’s been a business owner. While he misses these comforts of home, Salter says that he’s taking it mile by mile. “It’s a pleasure to be out on the road and do that,” he concludes.

Those wishing to support the mission of Jeff Salter’s cross-country trip can make a donation to the Grab the Bars campaign, which provides grab-bar installations in the homes of senior citizens in order to reduce falls, which are the leading cause of injury among the elderly. A donation of $250 can provide two grab-bars.